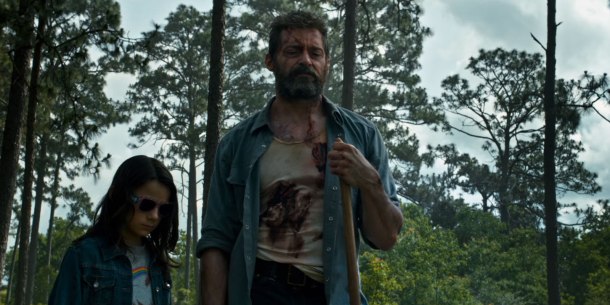 Logan is the superhero movie that we’ve been waiting for. The X-Men franchise seemed rocky after the overstuffed disappointment of X-Men: Apocalypse, but Logan shines as not only the best Wolverine film, but maybe the best X-Men movie to date. And with the exception of last year’s Hell or High Water, this is one of the best westerns in the last decade. Patrick Stewart and Hugh Jackman return to their roles as Professor Charles Xavier and Wolverine (aka Logan), respectively, for one last bloody and brutal ride.

When we catch up to Logan, he’s working as a chauffeur and taking care of a mentally decaying Prof. X in the Mexican desert, seemingly hiding out after a potentially destructive and traumatic event. Wolverine is approached by a woman who wants to hire him to escort a young mutant up north. After his compound is attacked, Wolverine, Xavier and the young girl set off, attempting to escape the mercenaries chasing after them and eventually make it across the Canadian border.

Logan isn’t afraid to be violent – that’s what sets this film apart from the other Wolverine movies. One of my biggest issues with the previous Wolverine movies is they were too tame for such an unhinged character. In Logan, Wolverine stabs and mutilates enemies in the first scene. This time, when Wolverine talks about being a bad person, you see the repercussions of his actions. And it doesn’t hurt that we get to see Patrick Stewart liberally drop F-bombs from the moment he comes on screen.

This may be Jackman’s best performance as Wolverine, and it might even be his best in any film yet. He caps off his run in a particularly damaged and vulnerable way. He’s haunted by his past and is trying to find a reason to live. It’s also worth noting that he’s visibly past his prime in fight scenes. He easily dispatches lower-level guards, but, whereas in previous films it would be no trouble, here, he is stumbling, winded, and not healing as quickly as he used to.

Stewart gives a great performance as well portraying a Professor X we haven’t seen before. He’s more blunt and bitter than usual, but also quite vulnerable, as a tragedy in Xavier and Logan’s recent past continues to plague his character. Xavier is now suffering from memory-related mental illness and combined with his powers, it is dangerous for all. In addition, I can’t discount the great work of newcomer Dafne Keen in her role as Laura (or X23). She gives a terrific performance as a wild, almost feral little girl who is not afraid to eviscerate people. She is mute for most of the movie, but shows plenty of range. I’m really excited to see where the franchise goes if any future projects focus on her.

If there’s one issue with Logan, it’s that the antagonists are not as developed as they should have been. For example, there’s a villain whose existence is similar to the T-1000 in Terminator 2: Judgement Day. Also, the head doctor at the facility that X23 escapes from is kind of treated as unimportant despite being the main antagonist. He’s given short shrift in the film. However, what does work is that when the good guys die, there are no overly dramatic scenes in which there is a sappy funeral with overdrawn speeches. While there are emotional moments regarding death, it isn’t overdone. Characters are just gone and that is incredibly fitting with the tone of the rest of the film.

Logan is a gritty, emotional western-thriller that serves as a satisfying and fitting conclusion to one of the best superhero performances.