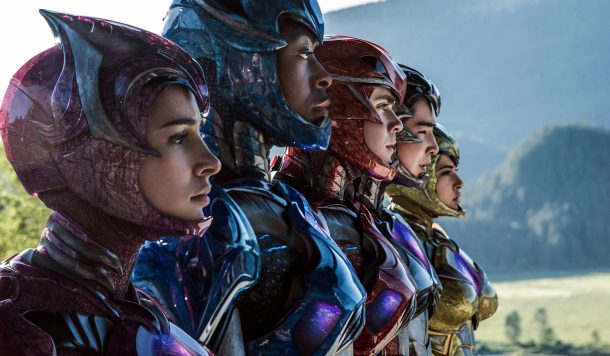 1993. What a year. Power Rangers stormed onto television sets everywhere and morphed their way into our hearts. Just a few short years later, I found myself watching them constantly. Whether it was the original series, Zeo, Turbo, Lightspeed Rescue, or the incredibly fun time of Mighty Morphin’ Power Rangers: The Movie, I was hooked. Now, here I am, years later, still a Power Rangers nerd and loving every second of it. When I first heard the news of a Power Rangers reboot starting production, I felt the usual mix of hopeful nostalgia and skeptical weariness. Was I excited to get see one of my childhood favorites back on the big screen? Of course I was. But, being the logical and sane person I am, I knew it would be tough to adapt the campy 90’s material into a critical and financial success.

I am pleasantly surprised, and completely relieved, to say that, after having seen the movie, it was, as the ’90s TV show too often said, MORPHINOMINAL. I loved it. However, I will preface my enthusiasm, by saying that I definitely have the distinct advantage of loving the source material. Some friends I saw it with who weren’t huge Power Rangers fans enjoyed it, but I doubt it was to the level that I did. I think that will probably ring true with most audiences. All this being said, though, I still see the entertainment value of this film.

What I’m most pleased with is the mix of fun, campy elements with serious, more dramatic tones. Usually, a movie with huge tonal shifts doesn’t work. Think M. Night Shyamalan’s The Visit, which has a horrifying jump scare one moment, and a small Beans lookalike rapping the next; it doesn’t really work. Power Rangers somehow strikes the happy medium for the most part. They give enough time between scenes of drastically different tones to keep the viewer from feeling like they jumped from a sincere, heartfelt scene to a giant robot smashing a giant monster in the next moment. There was buildup and a release of tension to allow you to be ready for the exciting or heartfelt moments.

More than anything, what Power Rangers needed to work was a great cast. The central focus of the Power Rangers is the teenagers in the suits. They drive the story forward. They get the audience to care. Dacre Montgomery and RJ Cyler, who play Jason Scott, The Red Ranger and Billy Cranston, The Blue Ranger respectively, are easily the standouts of the movie. Even though both are relatively unknown (although Cyler was fantastic in Me, Earl, and the Dying Girl), they play their characters perfectly. Jason is the tough jock leader who ultimately has a heart of gold and wants what’s best for his team. Montgomery is able to accomplish this without falling into that stereotype of the leader who just doesn’t really know how to lead and only occasionally gives a motivational speech (I like to call this the Vince Vaughn Role; the one he plays in Dodgeball and The Internship). Jason, for the most part, knows he can lead, and makes an honest attempt to do so. His concern for the team feels completely genuine once he gets to know his partners better.

Cranston, on the other hand, is a sort of stereotypical geeky character. He has his quirks and his brains, but again, ultimately just wants to be part of the team and truly cares about his fellow rangers. Cyler doesn’t let the quirks overtake his character (i.e. Jesse Eisenberg in Batman v Superman), but instead knows when to tone it down and be a real person. He is the connective tissue between the entire team, as his genuine love for what they’re doing makes everyone realize they’re a part of something special.

Naomi Scott as Kimberly, the Pink Ranger, and Ludi Lin as Zack, the Black Ranger, are both very solid in their roles as well. Lin takes some time to find his footing and not fall into the over-the-top stereotype of his daredevil character. However, by the third act, he transforms Zack into a much stronger character, with a lot of depth who audiences can take seriously. The only actor I have trouble with is Becky G as Trini, the Yellow Ranger. Like a few of her fellow co-stars, she struggles at the beginning. The lines she was given are admittedly awkward, but I believe it to be an issue with line delivery more than anything. She falls into the stereotype of her resistant character; not really talking to the group and only offering up teenage angst-filled quips instead.

But as awkward as Becky G is, nothing compares to how bad Elizabeth Banks is as the villainous Rita Repulsa. She draws way too much inspiration from the ’90s Rita Repulsa, acting at the highest level of camp throughout the entire movie. Her constant screeches and odd voice just doesn’t work, and every time she spoke, no matter how serious her line was, the audience laughed. They weren’t laughing with her, they were absolutely laughing AT her. This shouldn’t be the case with a film’s villain, especially when that villain is constantly murdering people.

The story itself is fairly good. It’s extremely well-paced through the first two acts, delivering nice character and plot buildup leading into the third act. Most of the characters have a solid arc, the sense of time and place feel genuine, and nothing is rushed. Enter the third act, which is unfortunately, bing-bang-boom-done. I understand the struggle. The film clocks in at just over two hours, and the origin part of the story is the most important for the first entry in a hopeful franchise. I’m glad they spent more time introducing us to the kids and allowing us to see them grow as a team. However, the third act and resolution is much too rushed. It probably takes a total of twenty minutes, and without going into spoiler territory, A LOT happens in that small amount time.

Does Power Rangers have problems? Sure. To the average moviegoer, these issues probably add up to make Power Rangers a fun, if lacking, film. But, for a loud and proud Power Rangers fan like myself, I can tell you that, for me, these problems mostly fall by the wayside. I would be lying to myself if I gave this film anything less than an four out of five stars and I sincerely look forward to the franchise moving forward. Go, go get your ticket right now, kick back in your zord, and enjoy the morphinominal ride.