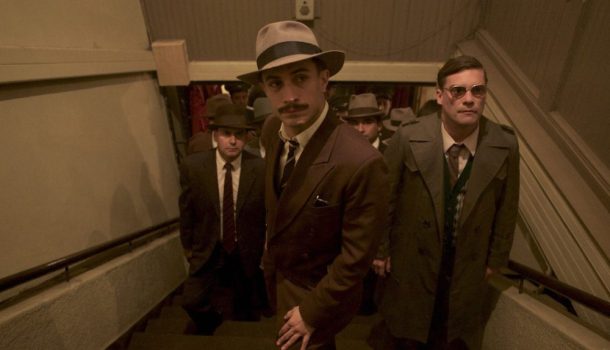 Director Pablo Larraín is on a winning streak. He’s made three films just in the past two years and seems to have effortlessly made his way on to the scene. Recently, he collaborated with producer Darren Aronofsky to make his widely-acclaimed English-language debut, Jackie, which received three well-deserved Oscar nominations. His latest film, also released in 2016, tells the whimsical tale of respected Chilean poet and leftist diplomat Pablo Neruda (Luis Gnecco), who flees his country when threatened by the country’s ban on communism. Neruda runs from Óscar Peluchonneau (Gael García Bernal), the cold, slim detective trying to catch him, who also acts as the film’s narrator.

Neruda is not the first film to employ a convict-hunting detective as the narrator, and writer Guillermo Calderón is aware of this fact. He writes his characters by bringing forth an acute awareness of the noir-ish inspector-narrator tradition and combining it with the warm, authorial character of the artist at the center of the story. It’s a film as parodic as it is honest.

A semi-fantastical biography, similar in this sense to Jackie, Neruda artfully blends the real and the unreal in a way that is smooth and slick. To begin, Peluchonneau romantically ponders, while expressing a deep hunger to catch his prey, “They say that Neruda is the most important communist in the world,” a statement which, undoubtedly, stems from Neruda’s own high regard of himself. The narrator is an imaginary character conceptualized in the poet’s mind. And he is everything that Neruda is not, save poetic.

Neruda is an artist who loves to work, play, and enjoy being everything his followers think he is. Peluchonneau is a silent detective who thrives in silence — always watching and listening. He likes it when his suspects “confess in whispers,” and proves it when interviewing the “stupid Spaniard” he suspects will lead him to the man he is so desperate to find.
Larraín is a wizard of moral ambiguity and a visionary who can successfully communicate stories involving everything but absolutes; a wisely ironic way to make a film about communism and fascism. He knows that no man is perfect and no man is entirely evil. Moreover, with moral ambiguity and a split in perspective comes one more ambiguity: either Neruda or his predator can be viewed as protagonist.

Together, the two explore the struggle to actually care about a country’s people when the political imprint is so deep that it’s easy to forget what’s being fought for. About halfway through the film, a woman approaches Pablo Neruda and asks for a kiss. She explains that she’s been part of the Communist Party since she was 14, but the conversation turns into one about motivation. When the people have truly been freed, she inquires, “will they be equal to [Neruda] or equal to [her]” — a working woman who has “cleaned the shit” of the rich her entire life? Neruda responds simply by stating that, indeed, the people will be equal to him and that they’ll “eat in bed and fornicate in the kitchen.”

Neruda is a jam-packed film, aptly full of movement and poetry. Its story is rich in content. It’s a fast-paced, action-based thriller of sorts, especially when one considers that it is, by technical definition, a biopic. It also contains technical similarities to Jackie; flared, restless cinematography similar to that of Emmanuel Lubezki and a sweeping string soundtrack that only gets more haunting as the film progresses. Jumpy editing techniques that match certain actions in transition—an interesting choice that adds to the restlessness—are utilized as well.

Pablo Larraín has learned, like Pablo Neruda, how to keep his artistic identity and wear it proudly while giving the audience what they want. He’s sculpting his vision and blurring the line between art film and mainstream drama. The difference is that he has the leg up on Neruda; he’s proven that he’s not self-centered enough to let himself fly too far out of bounds.