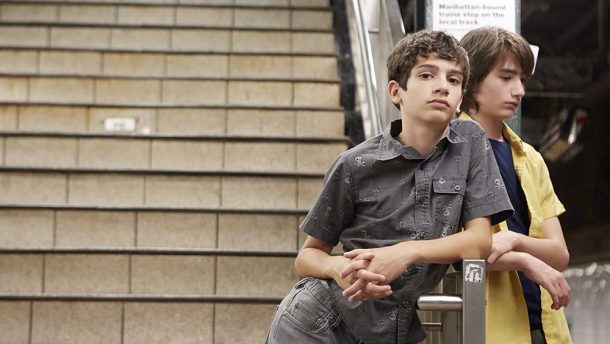 Ira Sachs’s Little Men runs like a visual play. It’s comparable to Roman Polanski’s 2011 film Carnage, which is a look into the loves of coddling urban parents. In Little Men, however, we see the flipside of that. The film examines the lives of coddled urban children — in particular, two young men: Jake Jardine (Theo Taplitz) and Tony Calvelli (Michael Barbieri). Jake is a recent transplant from Manhattan to Brooklyn, while Tony is a longtime resident of the neighborhood. Outspoken and friendly, Tony decides to take introverted and artistic Jake under his wing. They quickly become best friends, but after this, their lives become upended by their parents. Therein lies the drama of Little Men.

Jake comes from a wealthy background while Tony does not. Jake still had a nanny while living in Manhattan, and his mother, Kathy (Jennifer Ehle), makes a good income as a therapist. Jake’s father, Brian (Greg Kinnear), is an actor in off-off-Broadway shows. Tony lives with his mother, Leonor (Paulina García), who runs a specialty dress boutique under the large apartment Brian inherited after his father passed away. Tony’s father is working in Angola, and Tony doesn’t see him that often. Having these distinct, believable characters is what strengthens Little Men.

Written by Sachs and Mauricio Zacharias, the film feels like a play mostly because of its strongly developed characters and well-worded but curt dialogue. Some lines feel more forced than others, especially between Jake and Tony in the beginning. However, as the conflict unravels, the pace of the dialogue between characters picks up. Brian and Kathy need more money to stay afloat in the rapidly gentrifying Brooklyn, and Brian also has to give settlement money to his sister, Audrey (Talia Balsam). To do this, he needs to find a way to get Leonor to either close the shop or move it to another location so they can rent out the store space. Since Leonor’s contract is up and she’s stubborn about leaving, Brian comes to realize that the only way he can get her to leave is by evicting her. This irrevocably changes the otherwise pure friendship between Jake and Tony.

The acting in Little Men is superb. Taplitz and Barbieri are quite young, but their acting range is beyond their years. Barbieri in particular already shows significant chops. In one scene, he takes Jake with him to an acting class he’s in. Tony and his instructor get into a yelling match in order to understand inflection, and Tony perfectly keeps up with his instructor, showing tenderness, anger and whimsical joking. Jake, on the other hand, is quiet yet expressive still. When he realizes the extent of what has happened to Leonor and, in turn, to Tony, he sobs. It’s the most emotion he’s shown in the film up to this point, and it’s heart-wrenching to witness.

Overall, this is a very solid independent film. Little Men is, in fact, about two little men who are beginning to discover that their world isn’t as friendly as they may assume. There are harsh truths to life, especially in a place as diverse and expensive as New York City. To see a dialogue-driven and nostalgia-heavy (in terms of the childhood aspect) film, look no further than Little Men.