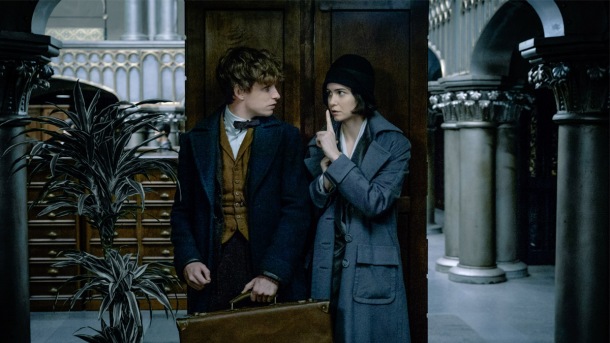 Harry Potter’s been out of the cultural zeitgeist for awhile now. The last film in the franchise was released more than five years ago, and since then, the wizarding world has been largely empty of content, with no new books or sequels to speak of. Nothing as popular as Harry Potter ever goes away, though, so it should come as no surprise that the property has seen a resurgence this year. The West End play Harry Potter and the Cursed Child has garnered both critical acclaim and high ticket sales, while its published script has gone on to sell millions of copies. To top it off, Potter fans have been eagerly awaiting the cinematic return to the world they love.

Everything that was old is new again in Fantastic Beasts and Where to Find Them. This time around, the story follows a young wizard named Newt Scamander (Eddie Redmayne) as he travels to New York City in 1926. Scamander accidentally lets a few of his magical creatures loose, and in an effort to conceal magic from the public, he hunts them down with the help of a merry cast of characters played by the likes of Katherine Waterston and Dan Fogler. Waterson’s character is a witch who has been demoted within the Magical Congress of the United States (MACUSA, the American version of the Ministry of Magic), and Folger plays a “nomag” (non magic) who gets swept up in the events of the film. The trio have great chemistry together and are clearly having a ton of fun playing these characters. Their story is a lighthearted and whimsical one, embodying all of the classic Harry Potter charm that made the original films such a hit. As the protagonists run across New York, hunting down these magical creatures, viewers are treated to a fantastic spectacle of spells both new and old, finely-crafted sets, and some truly wonderful creature design. The glutinous “Niffler,” a platypus lookalike that causes mischief by stealing gold and silver valuables, is the standout beast. Newt’s story is an exercise in world building, and lacks dramatic tension, but it makes up for it in pure entertainment value.

There’s also a plotline that runs parallel to Newt’s story, only briefly overlapping a few times. This other plotline follows Colin Farrell’s menacing and brooding Percival Graves, the director of security for MACUSA. While Newt’s story is reminiscent of the fun that permeated the first half of Harry Potter’s journey, Farrell’s side of things has the tone of the last few Potter films, taking on themes of depression and child exploitation. It’s pretty dark stuff, and thus carries most of the dramatic weight that Newt’s story lacks. However, because of this, Fantastic Beasts feels like a bit of a tonal mess. These stories may run parallel, but they feel so different that it’s practically like they’re different movies. By the end, they intersect in a way that makes sense, but for the majority of the film, it’s jarring to go back and forth from one extreme to another.

Fantastics Beasts is a cash grab. There’s no getting around that. Odds are that it will become another Hollywood mega-franchise just like Harry Potter. After the disappointing year big-budget films have had at the box office, I was skeptical of returning to a property like this. However, even in the face of franchise fatigue, I recognize that director David Yates knows the universe and will no doubt be churning out sequels like clockwork for the next five years. He’s got studio backing, a great production team, and a talented group of actors, which is a lot more than most blockbusters get. It was to my own surprise that, despite tonal issues and feeling primarily like a set-up for the films to come, Newt Scamander’s journey to New York is mostly magical, fun and engaging. In a movie climate full of heartless cash grabs, Fantastic Beasts and Where to Find Them manages to have more soul than most.