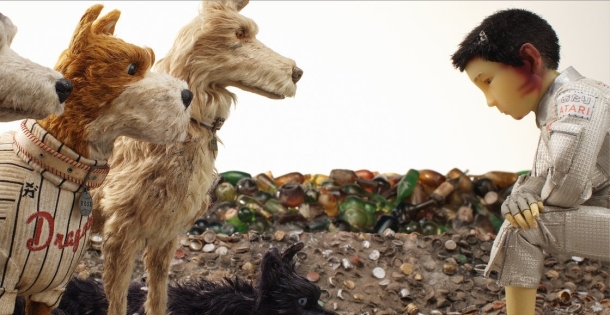 There are few stories that are more simple and resonant than that of a dog and its owner. Films depicting man’s best friend appeal to us simply because we hold such deep emotions for our own pets. This is why in the flashback sequence of Isle of Dogs, depicting our young protagonist’s first encounter with his dog Spots, I couldn’t help but think back on my own introduction to my dog; an instant connection that transcends shared language. The way that this film is so adept at showing the raw emotions that come with humans and their dogs is what separates this film from the rest of the pack. On the subject of uniqueness, one of the traits that makes Wes Anderson special as a filmmaker is that, with all of his works, there’s a constant balancing act of maintaining complete perfection of visuals alongside the imperfections of the people shown on screen. In all nine of his films, Anderson presents viewers with utterly gorgeous scenery and framing while telling the stories of complex, flawed characters. So, with this film, he simultaneously delivers some of his most impressive visuals and some of his most engaging characters.

This is not the first time that Anderson has tackled stop-motion filmmaking. What makes Isle of Dogs so different from his last stop motion outing, Fantastic Mr. Fox, is nearly a decade’s worth of experience and a completely opposite setting. While the latter takes place in a countryside forest, the former resides in a futuristic cityscape. With a futuristic setting comes the opportunity for an even greater sense of detail. For every piece of gadgetry in Isle of Dogs, there’s a unique texture and placement within the fabric of the film, like in the way that the screens have their own unique visual style. Technology has not been used in an Anderson film to this extent since The Life Aquatic, and, just like in that film, Isle of Dogs’ story could not be told without that level of usage. Now, this doesn’t mean that the film is devoid of Anderson’s trademark visual style. The birds eye close ups, long pans, and static montages are once again in full force throughout the film, but are repurposed to utilize the Japanese scenery, like in the lauded scene where a chef constructs a box of lethal yet delectable sushi. The way that Anderson shows fabrication in this film, whether it be the sushi, a dog’s new look, or a bright blue serum, is quite simply the stuff of brilliance.

In terms of characters, this film stands among the most diverse that Anderson has ever made. Not only is there an ensemble of wildly different animal characters, but human as well. From Jeff Goldblum’s gossipy Duke to Edward Norton’s vote-crazy Rex, from Koyu Rankin’s headstrong Atari to Greta Gerwig’s brash Tracy, the film displays a cast of talented actors using the screen-time they’re given to make the story that much more memorable. But, in terms of MVP’s, Bryan Cranston’s Chief is, to me, the most interesting and powerful character in the entire film. His arc throughout the story is never boring, ingenuine, or underperformed, and above all else – he’s a very good boy. The way in which Chief and Atari’s relationship changes throughout the film is some of Anderson’s most potent storytelling yet and is part of why this film is more than just a series of pretty pictures. Atari himself is yet another young character that Anderson has crafted to be just as engaging as the adults. And though her character has received some criticism, Tracy Walker is a definite standout as a boisterous exchange student that I argue serves as a pretty accurate depiction of the first thing Japanese people think of when told to describe the typical westerner.

I came into this film expecting a few things: intricately-made stop motion animation, a memorable cast of canine and human characters, and a good helping of classic Andersonian deadpan. Upon leaving the theater I proudly checked all of these items off. So, to anyone who admires and wishes to support the work of this dedicated and talented filmmaker, or to anyone who holds an affection for our fluffy adorable little buddies, this is a film that will indeed scratch your itch.