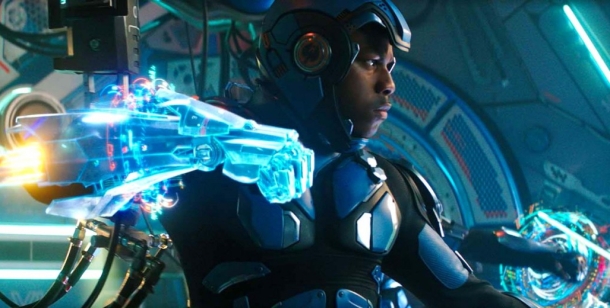 In 2013, Guillermo del Toro directed a rare find for moviegoers;a blockbuster that was not based on any preexisting material. Taking inspiration from the Kaiju genre that originated in Japan, the original Pacific Rim opened with a moderate box office haul and mixed reviews from critics and fans. Then an impressive performance in the auxiliary market, as well as Universal’s acquisition of Legendary Pictures, kept the sequel a possibility. Production on this film suffered numerous delays, including the departure of del Toro as well as star Charlie Hunnam. Now, after five years, Director Steven S. DeKnight steps in to continue the story.

Pacific Rim: Uprising takes place ten years after the events of the first film. The original concluded with Stacker Pentecost (Idris Elba) sacrificing himself to save the Earth. Now, his son, Jake Pentecost (John Boyega) lives as a thief, collecting parts from broken Jaegers to sell on the black market. When a theft goes wrong, Jake meets a young girl named Amara Namani (Cailee Spaeny) who has built a Jaeger herself. The two find themselves captured by the Pan Pacific Defense Corps and are now forced to choose between jail or service. Amara is enthusiastic to enlist while Jake reluctantly follows his father’s footsteps. Jake must work with rival Jaeger pilot Nate Lambert (Scott Eastwood) to train a new group of cadets. Jake then learns about a private corporation run by a man named Liwen Shao (Jing Tian). Shao is using the help of Dr. Newt Geiszler (Charlie Day) to launch drones to protect people around the world. This would leave the Pan Pacific Defense Corps unnecessary. New Kaiju attacks begin and it becomes apparent that there is something nefarious going on with the PPDC and the Shao Corporation. It is up to Jake and his friends to save the world.

Pacific Rim: Uprising offers up some interesting ideas on how to expand and continue the world created by Guillermo del Toro and Travis Beacham. However, there are too many ideas and story points to have anything developed. On top of that, del Toro’s touch is missing, creating a sequel devoid of style. This is unfortunate because the stylistic choices from the first film is what made it stand out from typical blockbuster fare, and made this universe resonate with fans.

Taking over the director’s chair from del Toro is Steven S. DeKnight. Known for his work on Smallville and Marvel’s Daredevil, this is his feature length directorial debut and it shows. Smaller moments with the main cast are competently directed, while big action sequences struggle to find a stylistic voice. The big Jaeger battles are much easier to follow than your typical Transformers flick, but they lack any style, and, in the flatly lit daytime sequences, the fights felt more like video game cutscenes than something cinematic. This shooting style ironically gives expensive looking CGI a cheap feel. While he struggles with big action, DeKnight does solid work in the film’s smaller moments. Conversation based scenes are directed well and offer a greater level of taste and sophistication than your typical Rock ‘Em Sock ‘Em robot flick (I’m looking at you Michael Bay). DeKnight’s directing does a good job servicing the performances, which are the only saving grace for this film.

Taking over the lead role from Charlie Hunnam, John Boyega shines in this film. Elevating the movie on his charm alone, Boyega proves that he is a star. That being said, the rest of the performances in the film range from serviceable to poor. Cailee Spaeny does an ok job playing Amara. She has good chemistry with Boyega and does a decent job with the more dramatic elements of the film but her story line comes off as the least believable. That’s right, even the giant robots fighting giant aliens come off as more realistic than a teenage girl building a Jaeger on her own and being part of an elite team to save the world against alien invasion. The PPDC is full of military level personnel, but they send a fourteen-year-old girl who trained for a few weeks into battle? It’s irresponsible, nonsensical, and makes the film feel like a cartoon. Along with the cartoony feel, Scott Eastwood fails to impress as Nate Lambert. He lacks the charisma and on screen presence of his father, and turns in a dull and generic performance. Right now he is coasting on his looks and lineage, so it should behoove him to take some acting classes if he wants his career to have any sort of longevity.

The rest of the performances are serviceable, with no standouts other than Boyega. Returning cast member Charlie Day’s abilities are completely wasted here. He is a very talented comedian and his chops were used well in the original film. In this, the character has new motivations and takes on a different role. Unfortunately, this new turn does not play to Day’s strengths. Ironically, while Day takes a more serious turn, the film around him is much lighter in tone than its predecessor. The tone services Boyega well but it does a disservice to the narrative. The original Pacific Rim has a dark and gritty tone and treats the silly concept of “giant robots vs. giant aliens” seriously. This film treats the material like a Saturday morning cartoon or an episode of Power Rangers. But Pacific Rim: Uprising has way too many convoluted storylines to be as fun or breezy as a cartoon.

The script is filled with poor dialogue and convoluted storytelling. Having a lot of plot is not a bad thing but this film does not develop any of the story points. For example, Jake is initially resistant in joining the PPDC. Then, upon entering the corps, he acts like a dedicated soldier. Plot elements are set up and then forgotten because the film has already moved on to the next beat. That being said, the film has a lot of twists that don’t feel earned. Revelations come completely out of nowhere and start to roll out one after another in the second half. As a result of these ideas not being set up or explained, they do not feel justified. Another element that feels very inauthentic is the dialogue. Every line feels generic leaving most characters without any distinct personality or development. The only characters done justice are John Boyega’s and Cailee Spaeny’s characters. The script gives them a brother-sister dynamic that develops over the course of the film and both of them have very clear character arcs. As for everyone else, they remain static caricatures.

Overall, Pacific Rim: Uprising builds on the mythology of the original but it lacks the style and directorial stamp that made the original unique. An excellent performance from John Boyega is not enough to elevate this above typical blockbuster fare. With huge tentpole pictures coming out almost weekly at this point, Hollywood is going to have to work a lot harder to make sure each movie  stands out.