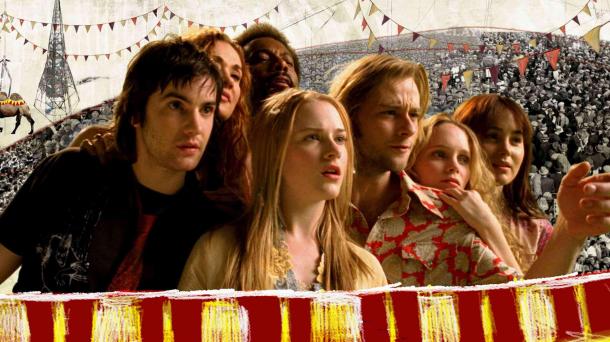 The first time I saw Across the Universe, 8-year-old me wasn’t sure what to make of it. It was dazzling and impressive, but I wasn’t sure what I was looking at and how I was supposed to feel about the film. A little more than a decade later, as I watched this film for what felt like the first time, I realized how fickle and unreceptive audiences can be when a film first comes out, how much audience tastes change over time, and how underrated this film is.

Across the Universe truly embodies the sense of breadth and wide range its title conveys. The film, which is set to 34 Beatles songs, captures the evolution of The Beatles’ music throughout the 1960s as they shifted from lighthearted, pure pop rock confection to introspective, incisive, and, psychedelic folk rock.It also encapsulates the wide range of socio political events and the new sense of boundlessness in music that rocked the 1960s. This film is most properly categorized as a jukebox musical due to the original Beatles songs used to create a cohesive narrative and the songs being sung by the film’s cast. Prior to the 1964 release of A Hard Day’s Night, a cinema-verité-shot musical comedy that used the entirety of the Beatles’ “A Hard Day’s Night” album as its score, no jukebox musicals of this caliber had existed. What makes Across the Universe so significant is not only its well-structured homage to the legacy of the Beatles’ music, but also the fact that it functions as an emblem for the impact The Beatles have had on several aspects of popular culture. Across the Universe is also a historical romantic drama that demonstrates the intersection between hippie counterculture, intense public opposition to the Vietnam War, artistic expression, and young, budding romance in Greenwich Village, New York.The two leads try to carefully navigate through an era marked by untrodden territory as conventional, “all-American” middle class ideals of societal norms, artistic expression, and political activism were falling to the wayside.

Directed by Julie Taymor, who is most notable for being the first woman to ever win a Tony award for directing The Lion King, the film stars Jim Sturgess in his breakout role as Jude, Evan Rachel Wood of Thirteen fame as Lucy, and Joe Anderson as Max. Ian La Frenais and Dick Clement wrote the screenplay and the story was developed by these two along with Taymor. Set to the music of the Beatles, with one musical number occurring every 5-10 minutes, the film begins in Liverpool, England in around the early 1960s and captures Jude, a young, artistic shipyard worker yearning for more and desiring to reach his full potential. Jude decides to head to America solely for the purpose of reconnecting with his father, who abandoned his mother when she was pregnant. He decides to stay longer; however, when he befriends an intelligent, rowdy, nonconformist Princeton undergraduate student, Max. Max invites Jude over to join his family for Thanksgiving and in the process Jude meets Lucy, a beautiful, bright, young woman who he quickly becomes enamoured with. After a heated argument between Max and his parents regarding his future and lack of practical ambitions in their eyes, Max decides to drop out of school and move to New York. Jude decides to move to New York with Max and soon after, Lucy follows to escape the restrictive environment she had become increasingly dissatisfied by. In New York, Max, Lucy, and Jude make some bohemian friends and begin new lifestyles that are less rigid and more artistically expressive and rewarding than the ones they had previously lived. Tensions rise among the leads as the Vietnam War leaves the American public continuously outraged and artistic expression and development often leading to an emotional disconnect among the characters. The romance shared by Jude and Lucy truly give this film its heart and humanity. Their relationship is the core of this film as it grounds it due to the visuals accompanying the utilization of Beatles’ music becomes increasingly more surreal and psychedelic. This helps the viewer navigate their way back to the main storyline while watching a film that at times places the viewer in a dreamlike state.

The music is obviously the most important aspect of the film, but what truly makes the film so incredibly captivating are the visuals. The stage design, cinematography, special effects, animation, and the misè-en-scene technique that accompany the music make the film that much more alluring. Costumes, set pieces, blocking of the scenes, etc., are done adroitly in a fashion that makes this film give off an air of being well-polished and bizarrely surreal and disorganized at the same time. The costumes are extremely well-fitting for the era and enrich the watching experience. The cinematography is very lush and the use of unconventional shots, often used to emphasize the surrealism draw the viewer in and hold their attention. The special effects and animation are used most prominently during the sequences of the film that expand upon one of the most significant aspects of hippie counterculture: drug use and experimentation. As the characters are having out-of-body experiences and are transported to a dreamlike realm, the audience is right alongside them. The futility & hatred of the Vietnam War is conveyed very impressively during a scene in which Max has to receive his physical examination prior to being sent to Vietnam. The disconnect between the government and the American public are emphasized by numerous special effects —- the most striking one being half-naked young women carrying an incredibly large Statue of Liberty on their backs. The misé-en-scene aesthetic is beautifully conveyed in the film due to the film relying much more on intricate choreography rather than editing. This film is undoubtedly a visual marvel.

This film’s shortcomings stem from the underdevelopment of the characters. The actors give solid performances, but the contrivance and prevalence of clichès throughout the story detract from the quality of the film to an extent. One does find themselves slightly bored during lengthier musical numbers because one can’t quite gauge whether or not they truly care about the character. The writers definitely could have been more skilled at making the characters more engaging. The characters aren’t wholly stiff, but there are times in which they seem rather two-dimensional, thus making it harder to relate to them. All in all, I recommend watching this film to experience the visual brilliance of it and skillful musical arrangement of it, if for nothing else. Across the Universe truly isn’t given the credit it deserves in terms of its impact on musicals, especially jukebox musicals. Mamma Mia couldn’t have reached the masses to the extent it did if this film hadn’t been released a year prior to tread new territory. This film isn’t without its faults, no movie is without sin after all, but it is pretty hard not to enjoy to it to at least a small extent.