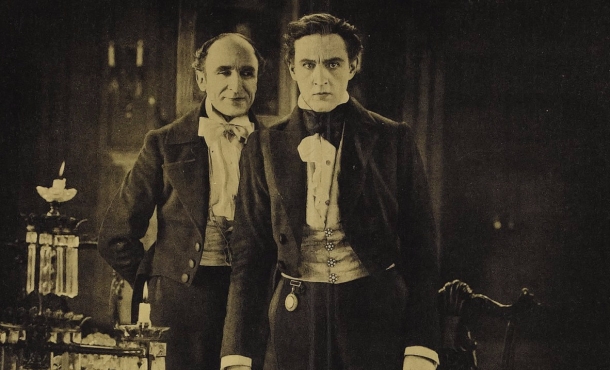 The Strange Case of Dr. Jekyll and Mr. Hyde by Robert Louis Stevenson is one of the most well known stories in literary history.  So naturally, Hollywood did what it has always done since its inception  and they made a movie based off of something popular in the hopes of making lots of money.  And thus, the 1920 silent film Dr. Jekyll and Mr. Hyde, directed by John S. Roberson, was born.  This film was recently screened by Cornell Cinema with live orchestrations. Because I know you’re all dying to know how it was, I made the perilous trek to Cornell’s campus to see it and have returned with a review.  So, spoiler alert for this 97 year old film.

Many actors have taken on the dual roles of Jekyll and Hyde over the last century.  With adaptations on stage to screens big and small, a long list of actors ranging from Michael Caine to Russell Crowe to David Hasselhoff have all donned the cape and top hat.  But how do John Barrymore and co. do?  How well does a silent film from 1920 hold up in 2017?  Well, it’s a mixed bag, but let’s start with the negative.

As was the style in the silent film era, the acting tends to be a bit over the top.  Sometimes it works, but other times it doesn’t. This is especially the case with some pretty funny facial expressions coming from Barrymore and Sir George Carew (Brandon Hurst).  In a movie that’s supposed to be suspenseful and scary, this can be a bit distracting at times, as evidenced by the occasional laughter these facial expressions got from the audience.  There is also a scene early on where a woman tells Hyde about her ring which can be used to hold poison.  And since we’ve seen movies before, it’s clear that the ring will be important later.  But then, they show us a pointless scene of the history of the ring that has nothing to do with anything.  The audience doesn’t need this  to know the ring is important.So, it only serves to make the the audience confused and bored.

The limitations of the film’s silent nature and less than 90 minute run time are also made clear.  The story feels rushed, as just when we’re starting to see Jekyll dealing with his dual identity things go wrong fast and the movie’s already almost over.  This isn’t helped by the film’s over reliance on text screens to give important information.  Sure, I understand that since it’s a silent film they need these to give context and exposition, but they are also often used to convey an important event has happened off screen.  Instead of showing us when Jekyll has some big realization or breakthrough, the text just tells us it happened.  Also,  some of the wording in the text is hilariously outdated, with the film calling Jekyll’s medical center for the poor a “human repair shop” (which I guess isn’t technically wrong but is still kind of a weird way to word it).  Even still, despite these problems, don’t dismiss this film just yet.

While there is a lot that doesn’t hold up in this film, there is also a lot that does.  The makeup used for Hyde’s face and hands holds up very well, looking impressively creepy and realistic, especially for the time.  And then I remember how lame Russell Crowe’s look as Hyde was in The Mummy this summer and I appreciate it even more.  The film also does a good job of establishing both sides of the duo.  It does the proper set-up to show us what a great guy Dr. Jekyll is while also effectively showing us how creepy Mr. Hyde is.  Speaking of creepy, there are many scenes in the movie that are creepy and downright thrilling.  The best example of this is the scene towards the end where Jekyll transforms for the first time into Hyde without the serum and kills Sir George Carew.  It is tense and effective, leaving the audience with a chill up their spin at the edge of their seats.  Also worth noting is the film’s effective integration of the novel’s themes, namely the dual nature of man, contrasting the rich and the poor, and, most notably, the psychological tolls of living the respectable life.  They are seamlessly blended into all aspects of the film, from the wardrobe to the characters and more.  And since there were live orchestrations, I will say that said music added to the experience greatly, effectively capturing the tone of each scene and enhancing it.

In summation, Dr. Jekyll and Mr. Hyde has various problems that don’t hold up in modern day while still presenting a thrilling and intriguing film.  If you’re a fan of the novella like me or just want to see some Hollywood history, I say give it a watch.