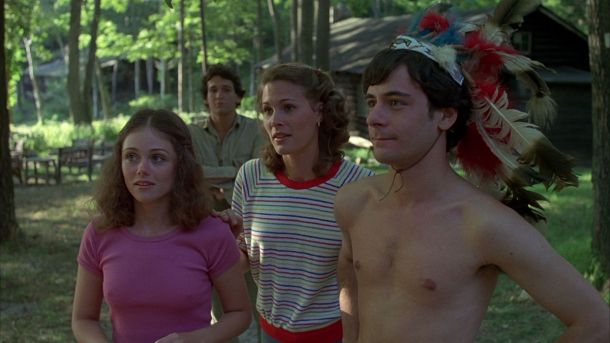 While most horror fans can agree 1978’s Halloween set the template for the slasher genre, 1980’s  Friday the 13th made the slasher the biggest horror genre of the 80’s.  The gory kills, the POV shots, the isolated location, the sex, and the final girl were all present in Halloween, but Friday the 13th mixed it together and really set the formula in stone.  While far from perfect from a technical standpoint, Friday the 13th accomplishes what it sets out to achieve; it entertains.

This is the first film in the longest running horror series of all time.  Over the course of 11 films, we’ve watched Jason Vorhees hack and slash his way from Camp Crystal Lake to New York to outer space.  While the series went on to be a tad outlandish, the first film is rather docile by comparison.  With a relatively small body count and a lack of a certain series staple, the original Friday the 13th can be a bit of a black sheep.  This differentiation from what the series would later become does not make Friday the 13th any less important or fun for that matter.

There is a reason Friday the 13th is a staple of horror.  First off, the film does a fantastic job of actually setting up atmosphere, something most slashers forget to do.  The film’s incredible Bernard Herrmann-esque sound design really instill tension and dread.  The film also makes great use of its setting, making sure to show off the vastness and prettiness of its campground during the day, so when the horror kicks in at night, it contrasts perfectly.  Of course, many would watch the film for its kills alone and it delivers.  Tom Savini’s makeup is grotesque yet fun and campy.  Each kill is either wholly satisfying or completely disgusting.  Lastly, is the story which, yes, is very by the books and predictable by today’s standards, but that doesn’t make it bad.  It is still fun to see the horror unfold and there is actually a neat little twist at the end for anyone who has never seen the first Friday the 13th.

From a technical and critical standpoint though, Friday the 13th does have some problems.  First, is the acting which is rather bad.  Everyone overacts and delivers lines in a way best described simply as being simply odd.  Standout bad performances include Robbi Morgan as Annie and (my favorite) Walt Gorney as Crazy Ralph.  Another issue is the odd pacing which jumps from kill after kill after kill within the span of 20 minutes, to nothing for another 20.  This can best be seen when Alice realizes murder is happening.  After the initial shock, the camera lingers on one shot for what seems like an eternity, totally killing the mood.  Lastly is, while I hate to admit it, the movie has a lack of real character.  Everyone is an archetype.  Even the most fleshed out characters can be boiled down to one dimensional stereotypes like the goof, the virgin, the killer, the boss and so on.

But (and this is a big but) not all these negatives work against the film.  Some of the issues just listed improved the viewing experience for me.  The bad acting in many cases, saves otherwise boring dialogue scenes.  I found myself laughing at benign lines of dialogue because of the sloppy delivery.  Crazy Ralph may be horrible at being scary but I laughed every second he was on screen.  While the characters are archetypes, it doesn’t seem to matter.  You still grow attached to the ones you should care about and the film does a good job at making you feel the friendship these teens have.  The film never set out to be an acting tour de force nor a character study; it’s about the fun, the scares, and the kills and I feel the film delivers on those. Of course, these things can’t be twisted into positives for everyone so if these negatives would truly damper your viewing experience, then you’re warned.

Friday the 13th may not be Citizen Kane but, as a fun horror, it does its job perfectly. With some genuine scares, great music, fun laughs, and gory kills, Friday the 13th delivers in every way in needs to. One of my favorite cinematic memories is connected to this film, when I saw it on Friday the 13th in the town where it was filmed.  So yeah, I’d recommend it to any horror fan or person wanting to get into the horror genre.