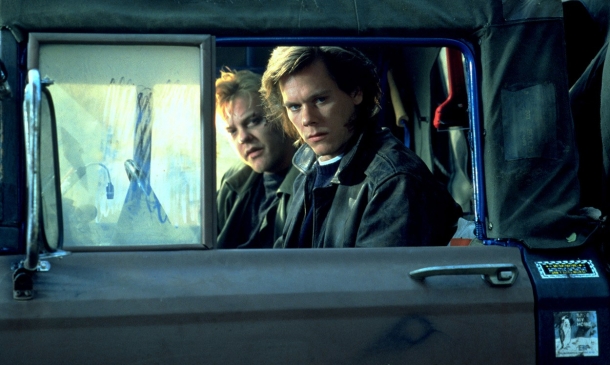 Flatliners, released in 1990, is nothing short of a complete and utter thrill ride. But, considering that this movie is directed by Joel Schumacher, the same guy who would later go on to direct incredible dramas such as Phantom of The Opera, is this really much of a surprise?

Flatliners is about medical student Nelson Wright who wants to find out, through science, whether there is life after death. So, he gets his college friends to help him kill himself for a short time, and then bring him back to life through emergency measures in a process they call ‘flatlining.’ The success of this experiment and Nelson’s life-changing discovery from it leads his friends wanting to conduct the experiment  themselves as well. But as the experiments go on, these college kids might find that their heavenly experience may have dire consequences leading to their own personal hell.

This film came out twenty-seven years ago, and it is certainly a product of its time. One glance at the costume design (especially the hairstyle of characters like Joe Hurley and David Labraccio) will instantly give off that retro 90’s vibe. Also, the setting of the movie will certainly clue viewers into how 90s this movie is, especially when viewing the interior design of the school these students attend. The film’s attempts to seem high-tech seems laughably basic and is certainly a factor in giving this film a dated feel. Now, this vibe isn’t all that distracting, but it’s certainly something for people to keep in mind coming into the film, especially if they are not a fan of films of that era.

While I did thoroughly enjoy the film, it is nowhere near perfect. For instance, the ‘horror’ elements within this movie are incredibly cliché. The slow creepy camera pan and the shot from the murderer’s perspective are the most blatantly obvious shots a horror scene could have, and this is pretty much how every ‘horror scene’ in the film is shot. It makes a lot of the scenes where a character is being hunted down lose the tension because what is going to happen is far too obvious.

The film also has an issue maintaining tension in general. The first time we see a student ‘flatline’ there is tension because we are unsure if Nelson’s experiment will succeed or fail. But, by the third or fourth time, we already know the experiment succeeded, so all of the stakes of whether or not they’ll be able to bring this character back to life is gone. They try to add elements that would make up for this, such as certain characters missing in action and them losing power, but it simply falls flat on its face.

However, what this film gets wrong can easily be forgiven because of how much it gets right. The characters in this movie are brilliantly brought to life by big time actors like Kevin Bacon as David, William Baldwin as Joe, and Kiefer Sutherland as Nelson. Not only do these characters play off each-other well, giving a feeling of close college camaraderie, but watching the stark contrast of how a character acted before they ‘flatlined’ to after was quite fascinating. This especially applies to Nelson, whose transformation from calm collected scientist to completely eccentric nutjob is an absolute joy to watch. Nelson’s drastic actions in the climax of the movie especially build so much energy and excitement that it’s guaranteed to have audiences on the edge of their seat.

This movie also does an excellent job setting up moral dilemmas for all of the characters. Because each student’s personality is so unique, not only is each student’s experience with ‘flatlining’ different, but the consequences that come with doing so present themselves in unique ways. It’s fascinating and exciting to see how each set of consequences effects each student and how each student reacts to these consequences in their own way. If there’s one shortcoming to this idea its that one of the students, Randy, never ‘flatlines’ and it would’ve been interesting to see how the consequences affected him and how he chose to deal with them. It is a missed opportunity, but that’s more of a nitpick then a big problem.

There are also a lot of deep moral questions this film dares to ask its audience and they certainly don’t shy away from darker themes. After all, the movie has a lot to say about the hardships of dealing with past mistakes, as well as, what kind of person you would have to be to go through an experiment like this. It’s an insightful look at death, atonement, and human nature that will certainly keep you thinking after the credits roll.

All in all, Flatliners is a film that you certainly need to experience. If the brilliant concept hasn’t sold you, then the interesting characters, moral dilemmas, and fast pace certainly will. Hopefully, the reboot can live up to, or even surpass, this exciting rollercoaster ride of a movie.