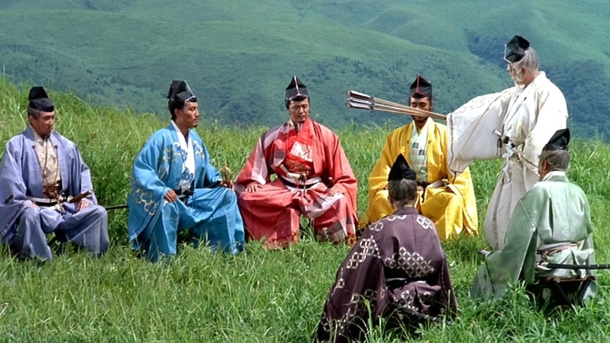 The last true great masterpiece from the esteemed Japanese director Akira Kurosawa, Ran is a story of consequence. Literally translated to Chaos in Japanese, that is a pretty great way to describe this film. It is loud, it is bombastic, it is bloodcurdling, and it is glorious. It took nearly a decade of toiling for Kurosawa to bring Ran to fruition, and in the end the film was financed as a French-Japanese production. Kurosawa had lost a lot of traction with his Japanese audience, so he had to turn to foreign companies in order to get his masterpiece made. Roger Ebert declared Ran to possibly be the best film ever made (surpassing both Citizen Kane and Casablanca). A retelling of Shakespeare’s King Lear, Ran is far more than just that. It is also a metaphorical telling of the end of a great director’s days, as Kurosawa was seventy-five years of age when the film was made.

Ran tells the story of Lord Hidetora Ichimonji (Tatsuya Nakadai), the head of the Ichimonji clan. The film takes place in the historical Segoku Period of the 1500’s. The bushido (or the unwritten samurai code) can be easily seen in this film, by ways of the virtues of honor and sacrifice the characters constantly practice throughout. In the film, Hidetora decides to bequeath his wealth and castles to his three sons; Taro (Akira Terao), Jiro (Jinpachi Nezu), and Saburo (Daisuke Ryû). Saburo, knowing how corrupt his brothers may be, tells his father that this is a foolish idea (bringing to mind the dual similarity of Cordelia in King Lear). Saburo is banished, but he turns out to be true. Taro and Jiro, in their quest for power and glory, wage war on one another. Hidetora, driven to insanity, wanders away from everything with his jester Kyoami (Pîtâ). The audience soon learns that Hidetora was just as corrupt as his sons, as while he wanders he comes across lands he had pillaged in his youth and the people this pillaging affected. In typical Shakespearean fashion, nearly everyone is dead by the end of the film. Gloucester states in King Lear “as flies to wanton boys are we to th’ gods, they kill us for their sport.” This describes Ran perfectly.

Kurosawa obviously influenced a great deal of Western directors tremendously. His 1958 film The Hidden Fortress was a driving force behind George Lucas’s Star Wars franchise. His most well-known film Seven Samurai became a large influence for a lot of Westerns and related samurai films. If there is any famous director who most resembles Kurosawa, however, it is Stanley Kubrick. While Ran is not Kurosawa’s most popular film in the public conscious (that would be Seven Samurai), it was the film Kurosawa considered to be his magnum opus. Going along this same tangent, Kubrick’s most famous film in the public eye is 2001: A Space Odyssey, whereas Eyes Wide Shut (his final film) was the film he considered to be his best and the one he wanted to make all along. Similar to directors of today such as Damien Chazelle and his making of Whiplash, Ran first began as another film entirely in order to get fully financed. This film, 1980’s Kagemusha, was the impetus that got Ran into production.

One of the best aspects of Kurosawa’s direction, especially in Ran, are both his use of expressive tracking shots and his slowing-down when it comes to displaying key actions. Another important feature of Kurosawa are what are known as tatami shots, wherein scenes are shot on a traditional tatami mat. This not only was something no other director had done before, but it also allows for the audience to be engrossed in the film’s story in a completely different manner from ever before (putting them on the same visual plane of existence as the film’s characters). One must not rush into things, and Kurosawa knows this on a fundamental level. Even in scenes of brutal carnage, Kurosawa manages to keep the film framed as if the audience is watching an opera. In all honesty, this is what a truly cinematic spectacle should be. In Ran, Hidetora has been popularly compared to Kurosawa himself. He is a man at the end of his rope, but he will do whatever possible to make sure that his legacy lives on. Hidetora is a complex man who is fully-realized, and it seems that Kurosawa was able to get so into his headspace because Hidetora is in fact Kurosawa.

Toru Takemitsu provides the wonderfully rich score for Ran. At times, the music is screaming, where at other moments it merely is a whisper. This in turn displays each character’s place in the story. Another huge element of Ran are its stunning visuals (the film was shot by three cinematographers; Asakazu Nakai, Takao Saitô, and Shôji Ueda). Probably the most famous shot of Ran involves Hidetora walking down the stairs of his ruined castle, with two different armies commanded by each of his sons standing on either side of the staircase. The colors of the armies perfectly contrast with the white of Hidetora’s robe and the orange of the seething flames behind him. It displays melancholy and defeat in the most innovative of manners.

Overall, Ran should be considered one of the strongest films that are currently in existence today. Akira Kurosawa is a master of the cinematic art form. His can easily be compared to such European and American greats like Scorsese, Truffeaut, Bergman, Lean, and even Anderson. Not only is Ran a nearly perfect adaptation of one of William Shakespeare’s best (and tragic) plays, it is also a nearly perfect film.