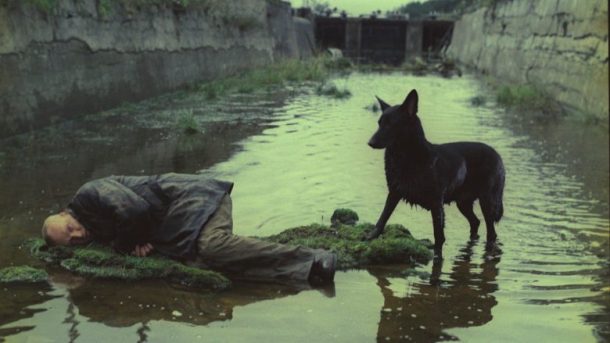 Andrei Tarkovsky’s 1979 Soviet classic, loosely based on the novel Roadside Picnic by the Strugatsky brothers, evokes, in a manner you could only find in a Tarkovsky film, a swirling wonderland of post-apocalyptic psychological mayhem. It follows three men on a journey through “The Zone” to find “The Room,” a place where all their wishes will be, supposedly, fulfilled.

The first thing I notice about Stalker is the sound. Though typically restrained, it attacks the viewer in a way that is anything but subtle. This happens in a very film-school way, as if whoever designed it is only learning about sound design methods for the first time. However, it’s effective. It’s surreal. It adds to Tarkovsky’s weird vision. Characters’ footsteps sound like they’re made from reverberating springs. It is both moodily atmospheric and fiercely clear. Soundscapes sweep the soundtrack, which is comprised of both eastern and western instruments, specifically the Azerbaijani tar, which the director supposedly fell in love with upon first listen.

Though everything’s been said about the unique cinematography and production design of Tarkovsky (who’s actually credited as his own production designer), I did see something new in Stalker which I haven’t noticed in his other films. Despite  the film  having its fair share of Tarkovsky’s trademark “standing-in-a-field” shot, which I’m sure Lars von Trier drools over daily, a lot of the environment directly around the three men is cut off. This is either due to enclosure by hallways, doorways, and all manner of industrial architecture or  the employment of extreme close-ups in the vein of the filmmaker’s Soviet comrade, Sergei Eisenstein. Said environmental restriction reels the viewer in and pushes them away in repulsion.

Tarkovsky is one of those artists like Roald Dahl, Lemony Snicket, David Hockney, or Stanley Kubrick. When you watch one of his films, you’re not on a specific place on Earth at a specific time; you’re in Tarkovskyland, a place of magic a few  degrees removed from reality. The fact that  Stalker was released just a few years before the Chernobyl disaster only adds to the brooding, prophetic quality of the film. Its release was as kairotic as 2001: A Space Odyssey being released a year before the Apollo 11 moon landing.

Stalker is sci-fi; this is something I tend to forget. So much of its “science fiction” comes in the form of its delicately placed philosophical exchanges in dialogue, in which a single missing line would be a tremendous loss. The Stalker (Alexander Kaidanovsky), The Writer (Anatoli Solonitsyn), and The Professor (Nikolai Grinko) contemplate all matters of the nature of man and its relationship to “The Zone” through which they travel. All three actors capture their characters with a delicate swagger that flows only from a lot of rehearsal. The film is comprised of a mere 142 shots over a whopping two and a half hours. The result is a trio of clearly practiced performances in which each line acts as another stanza of a poem.

More than anything, this film is about doubt. The Writer doubts he’ll find inspiration.The Professor doubts he’ll find any scientific discovery worthy of the Nobel Prize, which he mightily desires. Even the Stalker begins to doubt himself; as a man who has chosen the path of stalker solely out of altruism, hearing his clients so unhappy dispirits him beyond even their level. They all lack hope and they discuss their lack in hope as the film goes on.

A classic of Soviet cinema and a staple of any student of Tarkovsky, Stalker remains a bit of a mystery. Though well-received, it took a long time for it to be seen and almost feels as if it didn’t want to be (a processing error forced the filmmakers to reshoot a large portion of scenes, and a power outage due to an electricians strike at Cannes kept it from being seen at its premiere).

Tarkovsky movies are like good gym sessions, grades, a relationship, or really anything worthy of pursuing: what you put in is what you get out. Stalker is no exception.