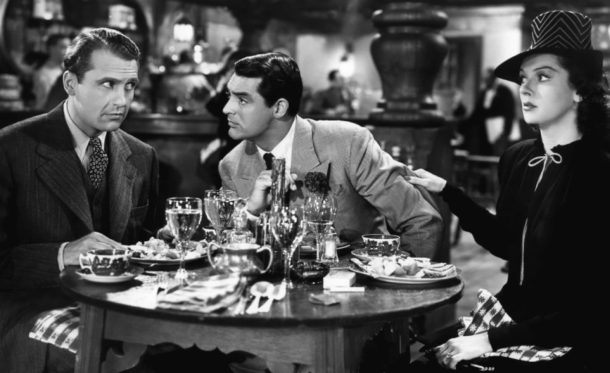 The Criterion Collection prides itself on putting out hard-to-find films, but this Tuesday, they’re releasing one that’s been in the public domain for almost 50 years. Why? Because His Girl Friday is just that damn good. Watching this is like watching an 18-wheeler back up perfectly into a narrow spot on its first try. It looks so simple, but you’re amazed that anyone is capable of actually pulling it off. And if anyone is capable of balancing as many spinning plates as His Girl Friday has, it’s Howard Hawks.

Hawks is one of the great Hollywood directors. He may not be the most stylish or the most poetic filmmaker, but he gets the job done, no matter what the job entails. He’s mastered gangster movies (Scarface), screwball comedies (Bringing Up Baby), heart-wrenching dramas (Only Angels Have Wings), war movies (Sergeant York), romantic comedies (Ball of Fire), film noir (The Big Sleep), glitzy musicals (Gentlemen Prefer Blondes) and westerns (Rio Bravo). You name it, he’s done it, and chances are he’s done it better than anyone else.

Part of his brilliance is in the way he sets up his movies. Just watch the opening of this film. After a winking title card, we’re plopped into the loud, busy offices of The Morning Post. People run around, papers are passed, calls are placed, copy boys are shouted for, elevators are chased after. Then in walks Hildy Johnson (Rosalind Russell). Everybody stops for Hildy Johnson. She’s a friend and a leader to everyone in the office. But she’s not there to see them. She’s there to see “the lord of the universe,” Walter Burns (Cary Grant), editor-in-chief of The Morning Post. He also happens to be her ex-husband.

Walter is, to be blunt, kind of an asshole. And played by any other actor, he would come off that way. But this isn’t just any actor. This is Cary Grant, perhaps the most charismatic leading man of the era. He takes the conniving devil and makes him smooth and charming. Grant has such great confidence in every movement and gesture that there are tiny details in his performance to be picked out with each viewing. A performance this immaculate threatens to overpower everyone else in the film, but luckily Rosalind Russell is every bit his equal. Hildy is the only one that can successfully stand up to Walter, and Russell has enough strength to sell it.

Their first scene together lasts nearly 10 minutes, for most of which they’re alone in an office, and it’s one of the most exhilarating stretches of film I’ve ever seen. Underneath the jokes and insults they hurl back and forth, there’s a lot of pain between them. They were divorced four months ago and Walter hasn’t exactly taken it lightly. This is especially troubling since she’s there to tell him she’s engaged to a man she’s only known for a couple of months. And as it always is in these kinds of movies, the wedding is tomorrow. Her fiancé is an insurance salesman who lives in the country. Walter says she’s incapable of living such a life, telling her, “You’re a newspaperman.”

“That’s why I’m quitting,” she retorts. “I want to go someplace where I can be a woman.”

Walter makes it his duty to make sure she does not marry this man and reminds her that their brand of ruthless journalism is her real calling. To explain the rest of the plot and how he does this would be useless; this is a screwball comedy after all.

Most of the laughs stem from the screenplay’s rapid, dizzying, often overlapping dialogue. These characters talk fast enough to make an auctioneer sweat. Generally, one page in a script equals one minute of screen time. The script for His Girl Friday is 180 pages. The movie’s only 92 minutes. The jokes fly by so quickly it can be intimidating on first viewing, but that just makes each revisit more rewarding. It’s easy to see its influence on people like Tarantino, Sorkin, and Iannucci.

In today’s movie landscape, we complain about the sheer amount of remakes and adaptations, but this is nothing new. His Girl Friday itself is a remake of The Front Page, released only nine years earlier. And The Front Page is based on the 1928 play of the same name. None of this really matters, of course. It’s only an issue at the time of release. History doesn’t remember the movie as a remake; it remembers it as a great film. Do we really need three different Spider-Man series in the span of 15 years? No, but if Homecoming turns out to be a great film, then all complaints will go away. Good art lives on, and His Girl Friday is one of the best films out there.