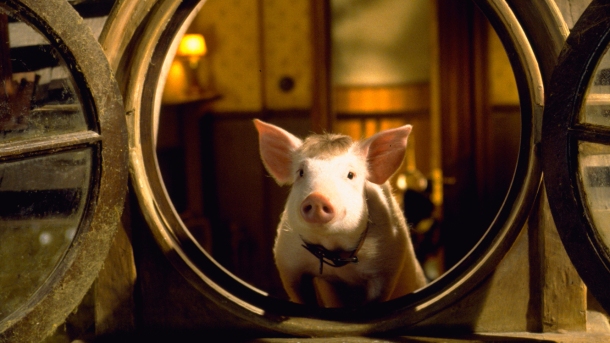 If you were an avid moviegoer in 1995, then you’d likely know that the Australian-American film, Babe caused quite a commotion when it first came out. It won a whole load of awards (including one from a certain Academy), provoked some picketing sessions outside cinemas by activists who were not fans of pig abuse (of which there was very little in the making of the film), boosted the numbers of the then fledgling vegetarianism movement by a considerable extent and grossed good ol’ Universal Studios a grand total of a little bit over $254 million. If you were a kid or a parent looking for something to do in 1995, well, then, maybe you just remember it as a really good, endearing talking animal movie about a cute little pig on a farm.

But really, no matter who or where you are, I am willing to bet a grand total of two Cokes and an ostrich on the fact that you’ve seen the first Babe. You would remember the charming story, or the seamless animatronics, or the meticulous set-pieces, or maybe just the simple image of a crowd standing and cheering for a pig that can herd sheep and James Cromwell looking down into the camera to utter that famous, long-suffering line, “That’ll do, pig. That’ll do.”

Not a lot of people seem to know about the second one, though. Most that have seen it don’t remember it and most that haven’t aren’t even aware it exists.

Upon an initial guess, you’d assume that it’s just another studio-minded sequel that was tossed into theatres, right? Poised to swindle some cash from the parents of children who can’t tell a script from a fable. And why wouldn’t you make that assumption? The Secret of NIMH, Home Alone, The Sandlot, Free Willy, Homeward Bound: The Incredible Journey, and so on… They’ve all been cursed with critically derided, largely forgotten sequels whose sole purposes were to turn a buck from a dime. So why should the sequel to Babe be any different?

To this day, over 15 years after the release of the film, Babe: Pig in the City is still getting mixed reviews. Not the kind of ‘mixed’ that you get from movies people walk out of trying to think of reasons why it might’ve been anything but mediocre—“Well, Tobey Maguire was good. I guess” or “The concept was interesting, but the writing sucked funky monkey balls.” Rather, mixed as in, say one day you’re looking for a movie to watch online and you see the average star rating is 2.5, but the cover says “Babe” on it, and you think, “Man, the first Babe was great. I wonder what went wrong with the second one?” So you go ahead and search the online reviews and you discover that of all the ratings listed on the total reviews page of Babe: Pig in the City exactly 50 percent of them are five star reviews calling the film “the most underrated classic of the last 30 years,” throwing out words like “beautiful,” “marvelous,” “profound” and “masterpiece.” There are some choice reviews that even mention absurd words like “expressionism,” “Dickensian” and “Felliniesque.” But then you take a look at the other 50 percent of the reviews, all of which are one star ratings that call the film “the worst sequel ever conceived,” throwing around words like “stressful,” “nightmarish,” “misconceived” and “disturbing.” There are some choice reviews that even mention bizarre words like “death,” “abuse,” “misery” and “pain.” As you try to comprehend this cracked up group of mismatched opinions, your eyes roll into the back of your noggin, and your brain pops out of your skull and starts rolling around on the ground in a perplexing inertia-driven stupor.

A Few Facts:
The movie was directed, co-written and co-produced by George Miller, the producer of the original Babe as well as the person responsible for all the Mad Max films, the two Happy Feet’s. His previous directorial effort under the studio system — The Witches of Eastwick, over ten years prior—had left such a horrible impression on the man that he refused to make the new Babe unless he had the final say on the cut of the film.

The movie has a small reputation as being the most expensive and most complicated live-action children’s film production of its time. Most major sets had to be built from scratch from the ground up, and the only location the producers could procure was in the old and decrepit section of an abandoned amusement park.

Almost every shot involved multiple trained animals having to both interact with each other, and hit incredibly specific marks in time with the complicated camera movements. There are a few shots that even involved over a hundred animals in the frame simultaneously.

The financial failure of this movie is cited as the primary reason for the resignation of then Universal Studios’ head Casey Silver, and the current president has called it one of the two worst films the studio has ever made (the other being 2010’s The Wolfman).

I think people get a little taken aback when I tell them Babe: Pig in the City is my favorite movie. Sometimes they’ll give me a funny look. Not a lot of people ask me why I like it, though. The camerawork, lighting, music and acting (including and especially the acting by the animals in their complex and figurative roles) is some of the best I’ve ever seen. But most of all, I love the film because no matter how dark things get, it shows how kindness, courage and compassion can make things better.

The movie begins with the farm from the first film being foreclosed upon, so the movie follows our eponymous little pork chop pal and the Boss’s Wife, Esme Hoggett as they venture into the big city in search of some cold hard cash. But the city is a dark and scary place, and it’s filled with strange, sad and scary citizens who don’t look too kindly upon a little “baldy, pinky, whitey thingy.” Oh, and, in this conurbation, it’s “no pets allowed.”

Babe soon gets separated from his human. Stuck in a crazy loopy hotel filled with all sorts of kooky characters, he very quickly shifts the focus of his operations from saving the farm to very simply just avoiding starvation. 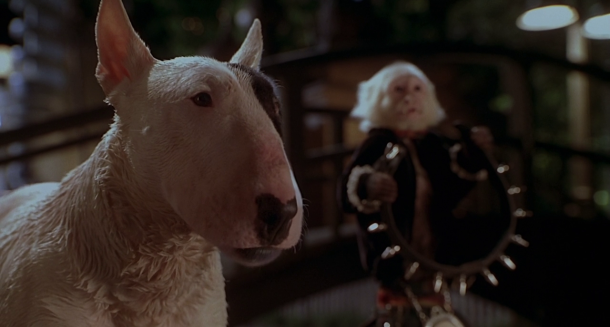 Most of the folks in this hotel are the supporting characters of the film. We have Bob, Zootie and Easy the chimpanzees, Thelonius the orangutan, Fugly the clown, Flealick the disabled dog (along with his two trusty pals, Alan and Nigel), a choir of cats, a light-fingered macaque, and later, a malevolent bull terrier with an armada of homeless castaway pets in tow. Will Babe be reunited with his human? Will he save the other animals? Will he finally find some food? Well it’s gonna be tough. As Ferdinand the duck so eloquently states, Babe’s “just a little pig in the big city. What [could he] possibly do? What [could] anyone do? Why even try?”

Believe it or not, Babe: Pig In The City is a film for intellectuals—children intellectuals. For those young cognoscentes out there with a keen eye and a sharp wit, most every scene and character is steeped in complex social commentary—children social commentary. Racism, classism, dependency, victimization, intolerance, indifference and oppression are all thrown up on the big screen for those feasting little minds to devour. Why doesn’t the city allow pets? Why do the chimpanzees kidnap poor little Babe? Why does the Bull Terrier have an obligation to maliciousness? And why in the world does Thelonious feel the need to get dressed? All these questions and more will be riddling the brains of those little literati tykes as they watch this philosophizin’ flick.

That sounds a little bit like an advertisement, doesn’t it? Well, that’s because, really, while these social issues do play a major role in the story, in actuality it isn’t what the movie’s about. And really, the kids aren’t the target audience for those more complex themes. The racism, oppression, dependency and victimization—stuff that people, whether they notice it or not, see every single day—it’s all what’s responsible for putting the film’s characters in their dingy, begrimed situations and mindsets. It’s the stuff adults (should) understand, but that children don’t.

And this is where we get to what the movie is actually about—something both kiddos and ’dulties could do well with learning or reminding themselves of, such as turning the other cheek. Or being nice to people, no matter who, where or how they are. Or doing your best to improve the lives of those around you. You know, selflessness and compassion and kindness and heart—stuff that you hardly ever see in any movies, regardless of the target audience. Some of the few lessons that anyone—no matter how intellectual, or how old, or how wizened—could learn from.