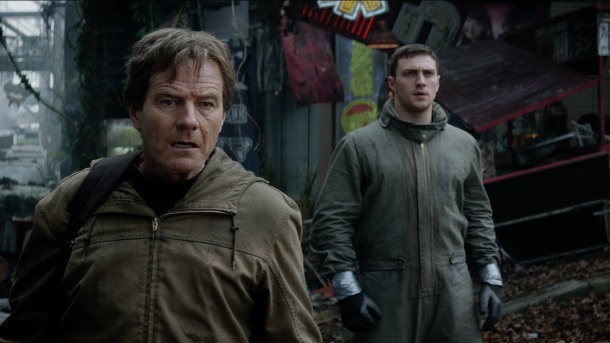 Godzilla (2014) could very well be the best version of the enormous monster that we have to date. The typical story is known far and wide; enormous lizard shows up and starts eating Japan. Godzilla is a world wide icon that anyone and everyone instantly recognizes, similar to Sherlock Holmes. You might not know exactly who they are, but a specific image jumps to mind when you hear the name. You have to expect great movies starring these characters and horrible movies starring the exact same characters. And you also have to expect movies that hug the middle line and end up more forgettable than anything else.

Godzilla stars Aaron Taylor-Johnson as Ford Brody, a member of the United States Navy whose narrative is decidedly wrapped up with the title monster as he lived in Japan during the time that the very first kaiju caused a nuclear meltdown. That meltdown killed Ford’s mother and caused his father (Bryan Cranston) to go nuts and attempt to find out the horrible, nuclear-chomping, enormous truth of what actually happened to his wife. The two return to the town that Ford grew up in and discover that monsters are real, they are ancient, and they are angry.

This brings us to one of the odder parts of the movie. Godzilla as a monster is known for fighting other enormous monsters and a few have even had movies based around them. However, these MUTOs (Massive Unidentified Terrestrial Organism are the main focus of the entire film, with minimal advertising done beforehand to inform the audience of this fact. So, focusing on these two MUTO’s seemed a little out of left field. They were the  main antagonists of the movie, eating nuclear power plants and mating everywhere, accidentally killing off the human race in the process. All of these are actions that are usually reserved for Godzilla himself. Giving them to these two set them up as the final monsters and warps Godzilla into a more heroic role.

We do not get to see a lot of Godzilla in this movie either. We get little shots, quick brief clips that show us his massive scale. It is as teasing as the shark from Jaws or the mother from Psycho. It is the beast in every horror movie that stalks the protagonist in the background and then we finally get a clear view of it for the final battle.

This can work and the movie did make it very interesting for the tone that they were going for and the shots that we were given, you wanted to keep watching. But, when you step into a movie where the name is headlining the main monster and more often than not already shows a full picture of them already, the tone becomes muddled and darkened. Godzilla was in his own movie for what felt like a total of fifteen total minutes, and, out of a two hour runtime, that is a huge amount of Godzilla-less-ness.

Another problem is that they could have handled the roots of the monster a little bit better. Godzilla has, for the most part, been wrapped around anti-nuclear or anti-war sentiments like a bronze coil. But in this movie, framing Godzilla as some sort of benevolent God or a monster fighting pet completely destroys that message. As long as the enormous monster with the blue death breath is on our side then the clearly evil monsters living in the sin of lust and wrath have no chance against us pathetic humans. Godzilla isn’t really a hero, he is just a monster meant to represent something; humanity’s destructiveness given physical form or nature balancing the scales by wiping out a few million humans.

Speaking of the humans they are not too memorable. The only actor that you can even remember is Bryan Cranston and the only “character” is Ken Watanabe as Dr. Ishiro Serizawa, the head scientist who studies monsters. There is nothing wrong with that, the actors are okay, just relatively unremarkable.

In the end, it felt like a very American version of the film, with an unfortunate bit of a lack of focus, some characters mishandled and a misdirection for the fans to get frustrated over. However, there was a lot that was fun with the movie; the fight scenes are cool, the lore behind the world seems exciting and the MUTO’s are unique enough that I sort of found myself getting into as the film went on. If you want to see monsters beating the snot out of each other, and are willing to sit through a bit of an average plot beforehand, then give this movie a shot.