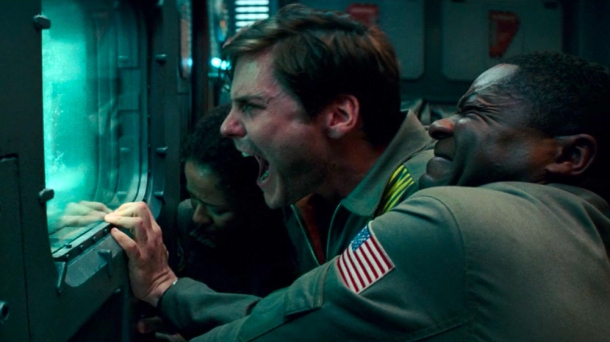 The Netflix viewing experience has drawn ire from many film traditionalists. While it offers great opportunities to unique filmmakers that wouldn’t usually have a voice in Hollywood, admittedly, something is lost when watching a film in your home as opposed to a theater. This discourse around the subject, frankly, sucks because it glosses over a lot of what makes Netflix movies… “Netflix movies.” The best Netflix films (think Gerald’s Game and The Meyerowitz Stories) are constructed differently than your average studio fare. As opposed to bombastic scores and wide shots, they have a far more subtle and intimate vibe that goes well with the subtle and intimate nature of home viewing. Whether or not this was by design varies from film to film and, obviously, there will be some outliers (Beasts of No Nation), but it seems to be a fairly good precedent for these types of works.

It’s why, in a way, The Cloverfield Paradox is perfect for Netflix. Because, while it strives for provocative and interesting ideas and a grand sense of scale, it never pushes through the level of a mediocre Black Mirror episode. Put simply, the movie is not finished and it never will be.

The Cloverfield Paradox tells the story of a group of scientists aboard the Cloverfield (or Shepard depending on who you ask), a space station with a particle accelerator that could potentially give Earth unlimited power and prevent oncoming nuclear war between all of the countries. Unfortunately, during the upteenth test, the crew finds themselves transported to an alternate dimension where nothing is coherent and everything is out to get them.

On a structural level, Paradox has an effective first act. Much of the cinematography is breathtaking (and, in one particular instance, quite moving) and the initial setup provides a fair amount of tension. While we may not know any of the characters very well, we understand the cultural tensions, especially with war on the horizon. Unfortunately, there’s only one scene that really plays with this concept. The rest of the film’s story walks a fine line between being derivative and downright insufferable.

A side effect of the underwhelming writing is the performances. Not a single cast member gives a performance that isn’t dull or uninspired, which is bizarre given their credentials. While the cast may not contain any household names, David Oyelowo and Chris O’Dowd have proven they can more than hold their own when given the right material. Here, however, they seemingly have no discernible purpose other than to run around hallways and look confused.

Perhaps the most frustrating part of Paradox is the editing and, by extension, the disjointed feel. Rather than bringing to mind films like Alien and Das Boot, The Cloverfield Paradox constantly reminded me of Suicide Squad. Scenes would seemingly meander with no direction. Story beats constantly give you the feeling that you accidentally skipped a few minutes. Worst of all is an obviously tacked on subplot about the protagonist’s husband that only exists to make connections to the original Cloverfield. Like Suicide Squad, The Cloverfield Paradox not only feels like it doesn’t know what it wants to be (as a result of studio notes and re-edits). It never really knew what it wanted to be in the first place.

I did not have a good time watching The Cloverfield Paradox and I suspect that, most likely, neither will you. It’s a disjointed, boring, little disaster of a film. The unique elements that the concept brings to the table are smothered out by the end of the first half. While some of it may be entertaining, it constantly switches from horror to melodrama to comedy on a dime without a firm understanding of how to make these genres function. It is a Cloverfield movie in name only. It is also a movie in name only.