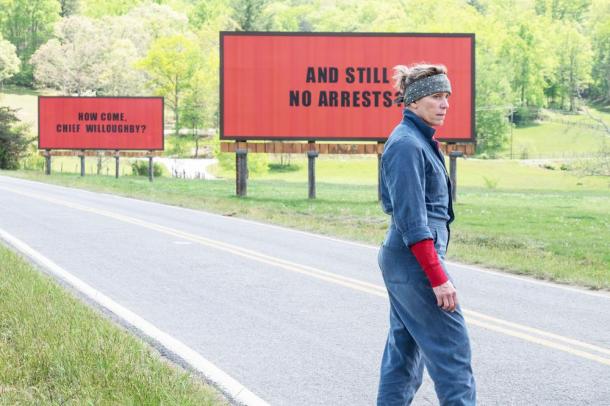 To the right of a winding road sits three withering billboards, where they pose in the haze of a fog that rests softly in the air. The long, beautiful shots used in the beginning of this film capture the perfect feeling of discovering a quietly elegant attraction. The billboards sit forgotten on the outside of town, fading into the enveloping fog. It sounds like the start to a poem, but this film is, in the best way possible, anything but poetic.

There is no fog to obscure the billboards when Mildred Hayes (Frances McDormand) discovers them. She ponders them for a moment, lost in thought. A few scenes later, we see three messages emblazoned on the billboards in harsh black letters on an outlandish red backdrop. Mildred has paid to have these messages put up, calling upon the complacency of the Ebbing, Missouri police department in the rape and murder case of her daughter, Angela.

Three Billboards Outside Ebbing, Missouri, without a doubt, starts with a bang. McDormand is the driving force of this film, consistent in her impeccable skill in evoking powerful feelings from the audience. Woody Harrelson as Chief Willoughby is, as expected, also phenomenal. Mildred’s billboards specifically target Willoughby , the head of the Ebbing Police Department, in his lack of arrests. Willoughby told Mildred he has done all he can — there are no DNA matches to any man in Ebbing or any man who has passed through Ebbing, but to Mildred, this is not enough.

Harrelson and McDormand play off each other in the most beautiful and bitter way possible. Each has a struggle that comes to define their character and shape the narrative, while Mildred struggles to live with the loss of her daughter, Willoughby suffers from cancer. His sickness is something that unexpectedly takes the forefront of the narrative as the film stretches on, and the decisions and actions of nearly every character are affected by him.

Director Martin McDonagh (Seven Psychopaths, In Bruges) has created a humorous, uncomfortable, and shocking film. His screenplay, laden with excellently written biting black humor, carries this film to some success. The value in this film stems from its shock value because many of the events that occur are unexpectedly, and disturbingly, harsh.

One scene, in which Mildred is questioned by Willoughby after being arrested for drilling a hole through her dentist’s nail , Willoughby, mid-sentence, coughs blood onto Mildred’s face. The event happens so suddenly, the shock felt by Mildred and Willoughby is also felt completely by the audience; it is moments like these — ones that rip the carpet abruptly from underneath the unsuspecting audience — that render the film so enrapturing and enchanting.

But McDonagh also takes many questionable liberties that were  heavy handed or lacked cohesivity. The decisions these characters make are intended to shock, but they did not always make sense. Officer Dixon (Sam Rockwell), in particular, is a racist but incompetent cop. He is also one of Mildred’s targets, who states she believes the police department’s inability to find her daughter’s killer is the result of a corrupt and racist police force.

Dixon comes across, for most of the film, as a drunken idiot. His racism is written very thinly, almost a quickly-added plot device to strengthen Mildred’s claim against the Ebbing police department. When he throws a man, the one who allowed the billboards to be refurbished in the first place, out of a window in the later half of the movie, it is not his reasonings behind his actions that are shocking, but rather the act itself. Dixon’s character does not feel threatening enough to be capable of doing something like this, and it makes the scene feel like it was only written to have continuity in the shock value that runs rampant throughout the film. Though I did enjoy this scene very much, it felt slightly out of character for a person who was continually proved to not be very menacing. I spend a considerable amount of time distracted by his weirdly written character, and it overall detracted from my viewing of the film.

The character of Mildred, however, is what ties this film together. Mildred assumes the one-woman-against-the-world persona, as residents of Ebbing, including her son and ex-husband, have taken stances against her vociferous accusations. She is unapologetically brash, hardened by her frustration with the system that has failed her and her own negligence on the night her daughter disappeared. However, Mildred harbors a despondent softness that appears every so often in the film. The scene with Willoughby, for instance, is one where Mildred lets the audience see this gentleness when she holds Willoughby’s face in her hands.. It is moments like this where McDormand establishes herself as the wheel upon which the film turns, rendering it one not only about a grieving mother, but also one that explores the nuances of how people deal with trauma.