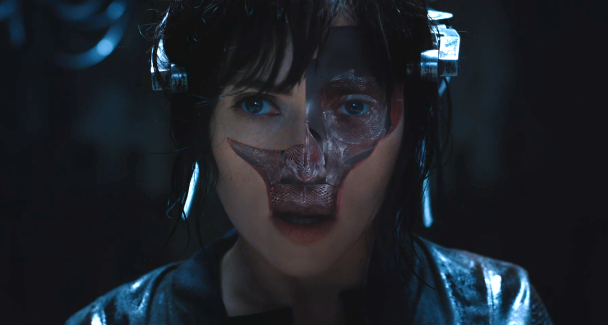 Ghost In The Shell is a Hollywood live-action adaptation of the classic 1995 anime film of the same name. The story follows the first successful human android, known only as Major, as she goes through her daily duties as a police specialist. However, when a mysterious hacker begins knocking off high-ranking corporate officials, Major seeks to uncover the truth of her past. If that sounds like a fairly basic, uninspired premise, that’s because it is. The film does nothing thematically creative, nor does it add anything new to this very stale setup besides cyberpunk flair and Scarlett Johansson in a tight-fitting morph suit.

Speaking of cyberpunk flair, the film’s visuals and production design are absolutely fantastic. Robots feel lifelike, but also appropriately inhuman, while body augmentation maintains a seamless realism. From the giant holograms that dominate the unnamed city’s skyline, to the cold, sterile corporate labs, to more low-key moments like a scuba scene, each scene is presented with a distinct vision. Similarly, the music, with its subtle synths during aerial shots and blaring orchestral pieces during large set pieces, goes a long way to supplement the film’s atmosphere. Action is well shot and edited but it suffers from the typical problems of a PG-13 outing. Gunshot wounds are bloodless, stabbings have little impact, and the best action sequence is, unfortunately, at the very beginning of the film. This opening scene is far more stylish than the others, making them disappointingly dry as the movie continues from one bloodless shootout or beatdown to the next.

The main cast does a competent job of playing their characters, but the script gives them very little to work with. Pilou Asbaek gives a solid performance as Batou, powerfully bringing what would otherwise be a generic by-the-book “soldier man” to life. Johansson also gives a solid performance, but she often slides back into the generic “emotionless android” trope a bit too easily. Takeshi Kitano as Aramaki gets to shine in his two significant scenes, providing his typical bravado and slick yakuza line delivery. While fun and exciting, Takeshi’s scenes feel slightly out of place with the rest of the world, despite his “old school cop” characterization.

The supporting cast is also serviceable, but it is given even less to work with. The film makes a point of introducing a whole team of police officers, but fails to utilize them in any way outside of the action sequences. Special attention is paid to Chin Han’s character, Han, in the first two acts, but the film seems to completely forget about him and the rest of team in the third act.

While the script flounders throughout most of the film, the third act is probably the biggest offender. After the predictable mid-story villain switch, the final act succumbs to a rushed and bloated cluster of exposition and clichés spread over a terrible final action set piece. All of Major’s tactical expertise and level headedness seems to fade away in the final fight. Similarly Takeshi’s character is given a political dilemma early in the film that the film ignores until the very end and which only results in some throwaway dialogue. If this all sounds rushed, it’s because it is rushed and this completely disrupts the positive momentum the film had going for it up to that point.

Can a movie be saved by its impressive production alone? For this film, sadly no. While a competently-acted visual feast, it is sadly held back by a poorly-paced, cliché-ridden script. There is enjoyment to be had here, but Ghost In The Shell is simply not a good film, all things considered.