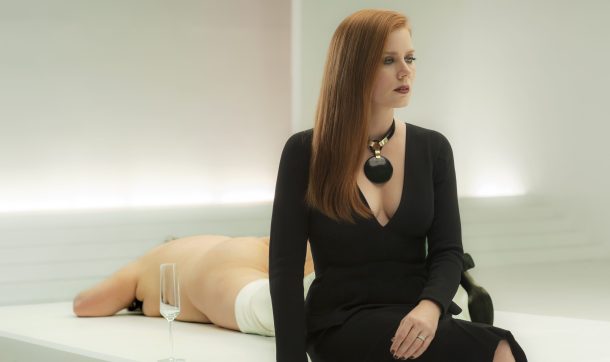 Tom Ford has proven that 2009’s A Single Man was no fluke with his latest film, Nocturnal Animals. Based on the novel of the same name, Nocturnal Animals is comprised of three stories. The first focuses on Susan Morrow (Amy Adams), an art gallery owner who receives a book from her ex-husband, Edward Sheffield (Jake Gyllenhaal). The second focuses on the events of the novel in which Tony Hastings (also Gyllenhaal) gets revenge after a traumatic event involving his family. The third story concerns Susan and Edward in the midst of their failed marriage. The film is a stylish thriller that revels in the indulgences of wealth and the grittiness of rural West Texas.

From the very first shot, the viewer knows they are in for a wild ride. In a shocking and explicit sequence, we are shown the absurdity of modern art. In case you aren’t aware, Tom Ford is an iconic fashion designer, and the lavish costumes and chic houses adorning this film are proof that he has an eye for style. Even if the story hadn’t been as good as it is, I would’ve still loved this film because it’s so dazzling and aesthetically pleasing. There is a stark difference between the present day where Susan is reading the book in her extravagant home, and the dingy Texas thriller that made for some incredible shots of horror that have strongly resonated with me since. This movie also contains one of the most tense and terrifying scenes I have seen in a long time during most of which I was almost out of my seat.

The film has an all-star cast, featuring Aaron Taylor-Johnson, Michael Sheen, Jena Malone, Andrea Riseborough, Armie Hammer, and Isla Fisher just to name some of the supporting players. But the two ancillary performances that stand out the most are those given by Laura Linney as Susan’s mother and Michael Shannon as the lawman who helps Tony get his revenge in the novel. Laura Linney is excellent in only one scene where she plays Susan’s mother as a cold, distant woman who has hair as big as her fortune. On the other hand, Michael Shannon is badass as a lawman who has cancer and doesn’t care how he gets justice. He portrays rage expertly and has a very sarcastic and dry delivery of lines that almost makes a horrible situation funny. Of course, Adams and Gyllenhaal are great in their roles as well. Adams plays an unhappy, unfulfilled woman with believable iciness. Gyllenhaal impressively demonstrates emotional extremes and handles some devastating scenes with explosive emotional displays. This is truly an actor’s movie and so much talent is on screen.

I believe that subtlety is something severely lacking in today’s films. People are so used to everything being told to the audience that when a film is incredibly understated, audiences don’t tend to understand much. Nocturnal Animals is very open-ended. The ending may be quite divisive among viewers, but I personally believe it worked for the film. It is a sort of revenge that comes off really well and is earned. The fact that the film shows and doesn’t explicitly tell is incredible. It is both a very effective thriller and wrenching emotional drama.

Nocturnal Animals is an expertly crafted film that balances three different stories with such subtlety, subverting expectations of the typical revenge tale by skillfully delving into complicated concepts of physical and emotional vengeance. Tom Ford is now on the map as a director whose films I will eagerly anticipate in the future.