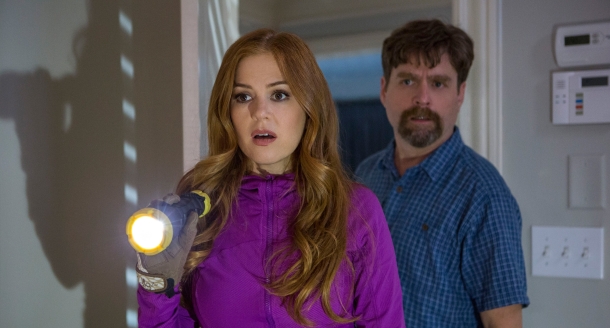 What if while you were living your average, boring life you found out your super-attractive, overachieving new neighbors were actually spies? This is the question that Greg Mottola’s new action-comedy, Keeping Up with the Joneses (sponsored by Mercedes Benz!) aims to answer. And although the presence of the Mercedes-Benz logo is consistent, the movie itself sadly is not.

The story follows the Gaffneys (Zach Galifianakis and Isla Fisher), a regular suburban couple who grow suspicious of their seemingly perfect new neighbors, the Joneses (Jon Hamm and Gal Gadot). They eventually discover that the Joneses are actually international superspies and get caught up in a mission that leads them to experience danger and excitement outside of suburbia.

As far as the performances go, the cast is filled with talented, funny people. Galifianakis and Fisher are both good as the middle class couple fascinated by their new neighbors. Their reactions to the plot’s wild developments are quirky but relatable. Hamm and Gadot are also great as the titular Joneses, selling the action sequences as well as many of the jokes. While Hamm seamlessly makes his “cool guy” character likeable, Gadot in particular is a standout. Her performance isn’t as warm or prototypically “likeable” as some of the others in the film, but she still makes her cold and calculating character interesting and charismatic. Overall, the main cast is filled with some funny people who do a good job with what they’re given. But sometimes what they’re given isn’t so great.

The movie has a fun premise that lends itself well to the action-comedy genre. The humor isn’t always consistent, but the film isn’t all bad. There are plenty of individual moments and jokes that get big laughs. The most effective scenes include a neighborhood barbecue, a scene where Karen Gaffney is caught following Natalie Jones while shopping for lingerie and the Gaffneys finding out the Joneses bugged their house. Unfortunately, there are also many scenes and jokes that are not so great. Many jokes fall flat, leaving the viewer feeling pretty “ehh” about the whole thing. This stems from the fact that the most entertaining section of the movie is when the Gaffneys are initially investigating the Joneses. Once they find out the the truth — a little over halfway through the movie — the film loses a little steam.

Now you may be wondering, “Hey, this is an action-comedy, what are the action sequences like?” Well, they’re fine, about as good as you would expect the action sequences in a comedy to be. This isn’t a straight action movie, so the action sequences aren’t meant to be the main draw or focus of the movie, the jokes are. That’s why the action mostly serves as a catalyst for more humor, which comes from contrasting the actions and reactions of the two couples. The first half of the movie is mostly action-free, but once the Gaffneys find out the Joneses are spies, the action picks up. There’s a car chase, a final fight in a hotel and a house blows up. That’s the extent of it.

If you’re bored and desperate to see a comedy or if you’re a big fan of one of the actors, there’s no harm in giving this a shot. At the same time, there are better movies out right now and many more coming out later this year. If I had to choose, I’d say save my money and skip this one. Maybe catch it one day when it’s playing on cable. While Keeping Up with the Joneses has a talented cast and some funny moments, the film’s inconsistency and occasional blandness makes it worth passing on.