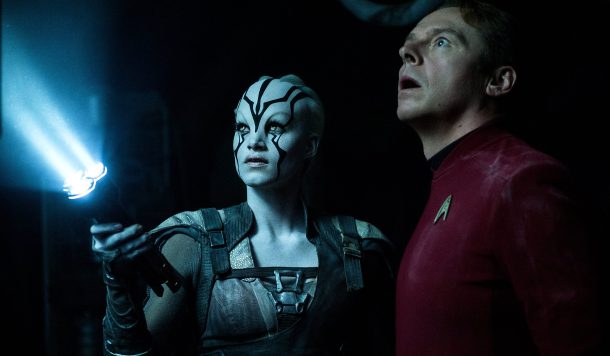 Way back in 2009, J.J. Abrams breathed life into the dormant Star Trek franchise by rebooting it as a summer blockbuster. Since then, the IP has been having a little bit of a resurgence. Abrams’s film was successful enough to spawn two sequels, (Into Darkness and Beyond), a few commercial video games, and the newly announced TV series. However, with skepticism high after fans were disappointed by Star Trek Into Darkness and a new director taking the helm while Abrams is busy kickstarting another sci-fi franchise, it’s an understatement to say that a lot rides on the success of Beyond.

To start off, the entire cast is back and just as charismatic as ever. Simon Pegg, Anton Yelchin, Karl Urban and John Cho continue to breathe life into characters that could have been standard archetypes. They’re given more to do in the story, as some other members of the U.S.S Enterprise become less prominent. The series has always been an ensemble, but the decision to focus on characters besides Kirk, Spock, and Uhura is a wise one, as it helps develop some of the lesser known crew aboard the Enterprise. I’m especially thankful for this given that the conflict between Spock and Uhura is one of the weakest parts of the film. They continue to have relationship issues, and to put it plainly, it’s just boring, especially because it’s so redundant with their character arcs from the previous two films.

One character arc that is handled well and differently is that of Captain Kirk’s. He’s not the young and reckless kid that enlisted in Starfleet with something to prove anymore. He’s a vetted, older, and more experienced captain, battling daily monotony instead of warring armies. Three years into a five-year mission, he’s starting to get worn down by the nature of his service as he continues to age, becoming older than his father ever was.

While the Enterprise is investigating a distress signal, it’s torn apart by alien ships and crash lands on an uncharted planet. So, weirdly enough, a series known for its space combat spends most of this movie literally grounding its characters. However, this premise lends itself well to the directorial talents of Justin Lin (of Fast & Furious fame), who manages to sneak a pretty cool motorcycle segment into the film, along with other exciting moments. Lin certainly knows how to direct an action sequence and he proves it with a number of intricately choreographed scenes. The spectacle of it all is pretty great, although there are a few instances that are either visually murky or unconvincing. It’s a tiny step back from the pristine visuals of deep space that were so impressive in the previous two installments.

There are a few other problems with the film as well. As the antagonist, Krall, Idris Elba does his best portraying a mostly wordless hulking brute with a grudge against the Federation. He’s not especially memorable in a role that never comes close to matching the formidable presence of Benedict Cumberbatch’s Khan, as the script doesn’t really give him much in terms of character development. In this way, Beyond feels like a regression. The whole conflict never quite has the gravity of the previous Starship Enterprise missions, and as Kirk himself says during the film, the story starts to become a bit episodic. For a film that clearly wants to be a major motion picture event, that’s pretty damning. After the cop-out ending of Into Darkness, there’s almost no sense of tension, and Beyond plays much like a straightforward episode of the series. There’s very little that moves the franchise towards some type of narrative culmination or epic event. Instead, it feels like filler to tide fans over until the next movie.

By far though, the biggest issue facing the series is still a growing disconnect between what Star Trek means to longtime Trekkies and what it means to the new generation of fans who were introduced to it by Abrams’s franchise. Since its reintroduction, it has defined itself more as an action series rather than a science fiction drama exploring the politics of colonialism and exploration. There’s nothing wrong with changing up the formula, but classic Star Trek fans will likely continue to be disappointed by this new line of films. As a straight up action film, though, you could do worse, especially in a summer as cinematically dour as this one.