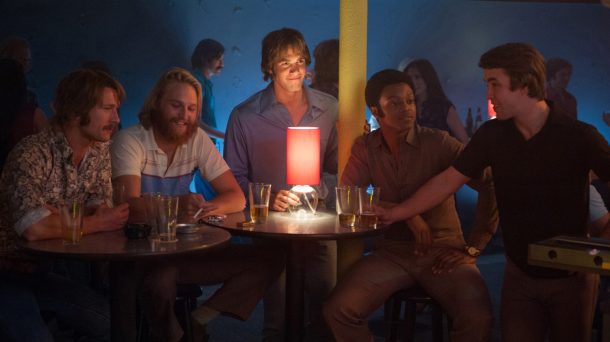 The first thing I did after stepping out of Richard Linklater’s latest film, Everybody Wants Some!!, was call my friend, Brian. Brian is a senior in college, which already makes him the targeted demographic for the ’80s-set college romp. More importantly, Brian is the captain of his college’s baseball team, giving him the rare distinction of a person who speaks the same bro-language and breathes the same rank air that the characters in Linklater’s film do — that of collegiate baseball. I called him not to question the film’s authenticity or its possible parallels to his own life, but to let him know that I had finally seen a film that seemed to capture his world so closely.

Everybody Wants Some!! follows freshman pitcher Jake’s (Blake Jenner) first weekend at college as he meets the rest of his team, dabbles in some extralegal activities, learns some bullshit about life, and actually plays a little bit of baseball (albeit, in practice). The film is the latest in what has been a trend in American indie cinema, wherein the script doesn’t so much follow a three-act structure as it does shrug it off and meander around.

It is in that meandering that Everybody Wants Some!! finds its strength. By relegating the already barebones plot to the background, the audience instead builds a rapport with the ensemble cast. And what a cast of characters it is! There’s Brumley (Tanner Kalina), the whispy-mustached freshman who looks and acts like he could be an understudy for Workaholics; Willoughby (Wyatt Russell), the pot-smokin’, caravan-livin’, Twilight Zone-obsessed elder guru; Plummer (Temple Baker), whose voice sounds like that of someone who has stopped and started up smoking at least a dozen times — he gets the biggest laugh of the film with an aside about a cat.

Of all the memorable performances, however, no one proves to be a more enjoyable presence than Glen Powell’s Finnegan, a character who manages to be both supremely jock-y and extremely sweet at the same time, seducing the viewer with his easygoing philosophy that ultimately defines the movie’s ethos. Really, the whole baseball team shines as a unit, gibing and ribbing and generally fucking around in a way that’s both believable and immensely entertaining. It’s the kind of movie you don’t want to just watch again, but live in.

Everybody Wants Some!! excels particularly in taking clichés and turning them into things that feel real. For instance, a group of characters get high and talk about music, and it’s both cringe-inducing and completely endearing. A punk show in the film is presented as more than a bunch of kids throwing themselves at each other; it’s also the grounds for a debate over self-worth and purpose. Another scene at a theater party is outrageous and ridiculous, but also silly and impossible to take too seriously. Most movies about college can only manage a cheap facsimile of the experience. They get the scenery right, but not the substance — not the atmosphere. Everybody Wants Some!! manages to do both, and it stands all the higher for it.