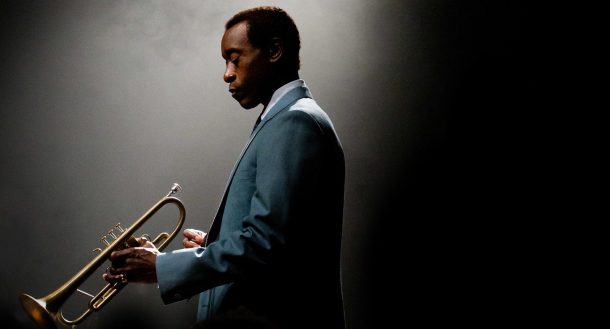 Miles Davis was a bad motherfucker — or at least that’s what the long-in-the-making biopic, Miles Ahead, wants us to initially believe. Written, produced, directed by and starring Don Cheadle in the central role, the film presents the jazz superstar as a swaggering gangster type. Self-involved, brazenly pistol-packing and unapologetically abrasive, Miles embodies the gangster mentality. His larger-than-life attitude — and the vulnerable spirit it covers up — is a major part of the film’s appeal.

This attitude is emblematic of Cheadle’s fascination with exteriors, as the first-time director expresses the spirit of the performer and his iconic music through formal experimentation rather than detailed storytelling and traditional character work. The substance comes from the surfaces in Miles Ahead. That’s what makes it both intriguing and frustrating to watch.

We meet Miles Davis at a point of creative impotence. It’s 1979 and Miles is living in isolation. He hasn’t released new music in five years, the jazz world is wondering where he’s gone, and the record company is pressuring him for fresh material. It seems like everyone wants a comeback album but Davis, who wastes away, limping around his cluttered apartment — a true “artist’s den” of scattered papers and liquor-stained glasses — lost in nostalgic thoughts and cursing everyone but himself.

The plot is set in motion when a Rolling Stone reporter named Dave Braden (Ewan McGregor) shows up at Davis’s door. He claims to have been sent by Columbia Records to do a story, but the musician wants nothing to do with him. After a bit of quick thinking and smooth talking, Braden is able to affix himself to Davis as he embarks on a wild night of confrontations, cocaine snorting and car chases.

The Rolling Stone journalist and all the events surrounding his arrival are fabricated. Cheadle’s embellishment walks a fine line between allegory and exploitation. On the one hand, the frenetic narrative functions as a representation of Davis’s improvisational music as well as the internal disarray he wrestled with. On the other hand, the story elements sometimes come off as superficial. Michael Stuhlbarg shines as a slimy record producer who occupies a villainous role, swiping a mysterious session tape from Miles — a tape that becomes the film’s Macguffin. The screeching tires, gunshots and punch-outs that this plot device inspires feel unnecessary and distracting — a cheap way of “jazzing up” the biographical portrait that often plays like Davis’s own straight-faced gangster fantasy.

Miles Ahead has more than one speed, though. Inserted throughout this central storyline are snapshots from the past featuring a much younger Miles Davis as he courts, marries and eventually drives away a dancer named Frances Taylor (Emayatzy Corinealdi). The flashbacks are smoothly insinuated (an elevator wall becomes a door to a ’50s jazz club, a blaring trumpet turns into a car horn, etc.) and seductively crafted. Grainy 16mm film only enhances the sense of nostalgia. Cheadle flirts with surrealism as well, melding the present with days gone by. One such moment takes place at a boxing match in ’79 and replaces the men inside the ring with a young Davis trumpeting away as a fight breaks out in the crowd — instigated by an older Davis.

The overall aesthetic is so enticing that it’s easy to overlook how cursory the character detail is. Frances (and her departure) is singled out as a significant aspect of Davis’s memory and as a serious contributor to his present day funk. But her characterization remains vague throughout. She’s a luminous object that is to be possessed and she’s defined by her status as a victim of her husband’s rampant cheating. Miles certainly demonstrates possessive qualities and one could argue that the thin characterization makes sense when seen through the lead’s hazy, subjective viewpoint, but this smells more like poor writing than intentional obfuscation.

Don Cheadle’s portrayal of Miles Davis is what ultimately makes the film so compelling. He nails Davis’s raspy voice and commands the screen with the unassailable confidence of a man secure in the clout he’s earned over the years. Cheadle is by turns suave, pensive and wrathful; much like the legend depicted, he doesn’t strike a sour note.

It’s just a pity that such a bravura performance is in service of this somewhat lackluster screenplay (co-written by Steven Baigelman). Davis’s tough-guy attitude is hinted at as a mask for some deeper vulnerability, but beyond this idea, his character is a bit of a mystery, and not in a positive way. The film’s structure is detrimental in this respect, as the alternation between timelines constantly shifts our focus and doesn’t allow for the feelings or characterizations of either section to be fully developed.

Miles Ahead is an uneven portrait of a musical genius who was a mess of a man. It’s consistently engaging and aesthetically pleasing, but for all of its dazzle, the film may prove unsatisfying for its failure to realize its emotional and thematic aspirations.