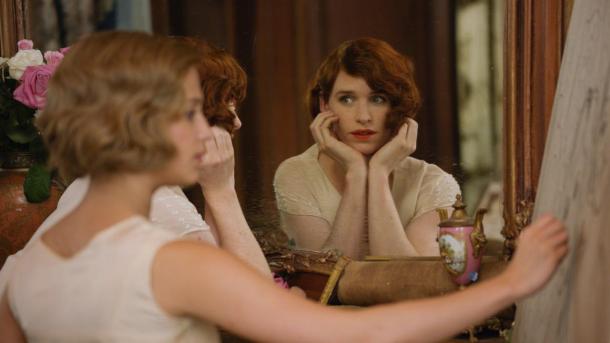 The Danish Girl is about the first transgender woman to go through reconstructive surgery. Last year’s Oscar-winner, Eddie Redmayne, plays the title role of Einar/Lili Wegener and breakout star, and Alicia Vikander portrays his wife, Gerda. The film comes to heavily depend on these two actors’ performances.

It starts out at an art exhibition of Einar’s work in Copenhagen, and moves on to show that both Einar and Gerda are artists, but Gerda is struggling a little more with getting her work noticed. The two are happily married and obviously in love. The plot really begins when Gerda asks Einar to throw a dress over himself so she can finish a portrait. In this scene you can tell that Einar longs to be in the dress. From then on, Gerda helps Einar play dress up, and it is unclear whether Gerda knows Einar’s inner thoughts or not.

Gerda plays along well and even convinces Einar to dress up and go to an event with her as Einar’s fictitious cousin, “Lili.” At the event, a man, named Henrik (played by actor Ben Whishaw), starts flirting with Lili and ends up kissing her, much to Gerda’s dislike. When Lili and Gerda return home, Gerda decides to paint a portrait of Lili and ends up finally achieving success in the art world, donning her own exhibition with many portraits of Lili.

Einar dresses up as Lili more and more, often to Gerda’s dismay, until Lili finally tells Gerda that this is who she truly is. Gerda, ever so graceful, accepts this with love and understanding and helps her former husband find a doctor that will perform reconstructive surgery.

The story is told with the most gentle of dialogue. Screenwriter Lucinda Coxon puts great care into making sure each line is poignant and that every scene is played into smoothly—with heartbreaking plot twists and one liners. Meanwhile, Tom Hooper’s direction is not intrusive. There’s an absence of music in the film’s most emotional scenes—scenes in which Vikander or Redmayne are crying because they each don’t know what’s coming next in their relationship.

There is careful calculation on the actor’s parts, with extreme sensitivity regarding the subject matter of this movie. The story hits home for many people and is a sensitive topic, and the actors clearly demonstrate this understanding. Ultimately, the film is about Lili, not Gerda, but Vikander effectively complements Redmayne, showing the heartbreak that goes into losing your husband, even if you’re not physically losing them as a person. At the same time, Redmayne’s eyes are laced with tragedy throughout, and one can truly sense the heartbreak Lili must be going through during her transition. I personally couldn’t pick out anything offensive, and the two leads played off each other so well, I forgot I was watching a movie. They almost never break eye contact when speaking, making their scenes and the bond they share more realistic.

One aspect of The Danish Girl that might be interesting to note is how it handles nudity. There are nude scenes in this movie that are so visually breathtaking—not for Redmayne’s or Vikander’s bodies, but for the simpleness and beauty with which they work their way into the plot. Most nude scenes I’ve watched in movies usually feel forced or out of place. Redmayne’s nude scene consists of his character staring at a full length mirror, imagining what it would be like to have a woman’s reproductive organs. Vikander’s nude scene is just as beautiful, coming after her character finds Einar wearing a dress underneath his suit as she undresses him. And instead of Einar leaning on Gerda to make love, Gerda turns it around and leans on Einar, reversing the stereotypical gender role. Seeing the wondrous look in Einar’s eyes after Gerda’s action actually caused me to tear up.

I personally found The Danish Girl to be a very emotional experience. Even when Einar turns into Lili, the couple stays in love. Lili is continually conflicted, caught between her love for Gerda and her desire to be in the body she truly belongs in, and it’s the incredibly vivid performances that make this tragic tale as beautiful as it is.