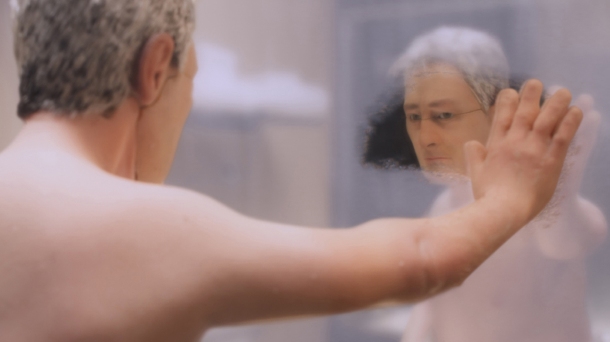 Charlie Kaufman’s breakthrough 1999 film, Being John Malkovich, opens with a puppet show. John Cusack’s Craig, a lonely, socially inept puppeteer, performs an interpretive dance with a six-inch representation of himself. The puppet begins its dance standing at a small table, seemingly lost in thought. It catches its own reflection in a mirror, gazes for a few seconds, then smashes the mirror. The puppet then deftly glides around the room, guided by Craig’s nimble fingers, until it eventually slumps into the corner of its miniature home and begins to cry. Only through the act of puppetry is Craig able to express his feelings of frustration, isolation, and despair.

Brought to life through stop-motion animation, Kaufman’s newest offering, Anomalisa, encounters the same themes of alienation and disconnection that the screenwriter has explored in his past work, but marries them to a simpler story than the writer has attempted before. The film follows yet another of Kaufman’s lonely, alienated middle-aged protagonists: this time it’s Michael, a customer-service expert traveling to Cincinnati to speak at a conference. In the opening moments, the central stylistic conceit becomes clear, as every occupant of Michael’s world possesses the same face and speaks in the same voice, a flat monotone provided by character actor, Tom Noonan. As he checks into the Fregoli Hotel (psychology majors may perk up at the name), Michael’s tedious life is interrupted when he’s drawn to the sweet, soothing voice of Lisa (Jennifer Jason Leigh), a call-center worker who has traveled to hear Michael speak. The film follows their lone night together, as they fall for each other in the most banal of surroundings.

With the notable exception of a Kafkaesque sequence involving hotel bureaucrats mid-film (which deviates visually from the rest of the piece), the characters occupy a recognizable reality, inhabiting generic hotel bars, shadowy cabs, and dingy sex shops. Although Charlie Kaufman’s creative voice dominates this project, co-director Duke Johnson and the creative personnel of the fledgling animation studio, Starburns Industries deserve much of the credit for bringing this world to the screen. Fans of the cult television comedies Community and Moral Orel (created, respectively, by Dan Harmon and Dino Stamatopolous, the founders of Starburns Industries) might recognize Johnson’s stop-motion handiwork. Here, he tackles the mundanity of the Fregoli in a way that feels familiar, yet oddly suffocating. The stop-motion animation introduces a feeling of artificiality that enhances Kaufman’s simplest story to date. Those who know of the impressive visual feats present in his other work may be disappointed at the lack of large-scale moments in this film; however, the animation style is so detailed and technically impressive that most viewers will find an abundance of detail in any one frame.

Beyond the visuals, Anomalisa’s main strength, its emotional resonance, lies in the aforementioned simplicity of Kaufman’s story. The film is unmistakably his, complete with his moments of unexpected humor (watch out for a small appearance by George W. Bush in puppet form), his cynical streak that colors his characters’ relationships, and his penchant for summative speeches. However, Anomalisa contains few of Kaufman’s signature twists-and-turns, opting instead for a plot that allows audiences to focus on Michael and his emotional journey. This is the clearest distillation of his pet themes to date, and a sharp deviation from the structure of his previous directorial effort, 2008’s Synecdoche, New York; whereas that film lives and dies by Kaufman’s complex experiments in postmodern storytelling, Anomalisa plays as a relatively straightforward tale of a man lost in his life. The result is a deeply emotional, heartbreaking film that accurately captures a feeling of existential dread – a difficult feat for any feature film, let alone one animated in stop-motion. The film may spark a newfound appreciation for adult animation in viewers, dealing as it does with universal issues of love, loss, and happiness. Kaufman and Johnson reiterate a lesson Craig demonstrated in Being John Malkovich 17 years ago: sometimes, emotional truths are best expressed through puppets.