by Haley Goetz
From the December 2015 Issue

Kids (Clark, 1995)
The story of how ​Kids ​was made is legendary. A young Harmony Korine was skateboarding when he came across Larry Clark, a photographer that he idolized. They got to talking and that night, Korine began to crank out the K​ids ​screenplay. About a week later, the 19-year-old delivered his script to Clark. Right away, the two of them got to making one of the best independent films of all time. The cast of characters was found directly on the streets of Manhattan and some of the amateur actors would become wildly famous soon after. ​Kids ​not only perfectly captures the vibrancy of adolescence, but also the escalating paranoia surrounding the AIDS crisis. Centered around a loosely connected group of New York City teenagers, the film tackles a variety of complex topics in a subdued, yet raw manner. A big controversy surrounded the film at the time of release, concerning the fact that the film’s sexually explicit content featured such young actors. Putting this aside, it becomes apparent just how profound an impact K​ids has had on the filmmaking community since its release. 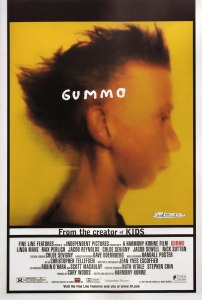 Gummo (Korine, 1997)
Two years after writing ​Kids​, Korine went on to both write and direct ​Gummo​. Another striking feature that holds a lot of layers, G​ummo ​brings with its characters a supreme sense of alienation. The story is based around a group of townsfolk from Xenia, Ohio who live through a tornado and its devastating effects. The action of the film takes place both before and after the tornado in question, and the actual disaster is never shown in concrete detail. Korine’s nihilism and sense of beauty is apparent in great detail throughout. There is a very strong juxtaposition between these two tones as they are expressed through the film’s cinematography and characters. The opening sequence is reminiscent of a classical painting, whereas the wayward boy it shows demonstrates Korine’s nihilistic writing in action. Korine establishes that this character feels nothing towards the world, and this only becomes more clear as the loosely constructed narrative continues. The rest of the characters in the film also have wayward spirits. No one is going anywhere, and the location of the film breeds this degree of nothingness. While Gummo ​is a fairly vague film, it is still a great piece of cinematic art that should be given a view.

Ken Park (Clark & Lachman, 2002)
Easily Clark’s second most famous film, ​Ken Park ​returns to a youth-­centered world focused around skateboarding (which was originally explored in Kids). Instead of Manhattan, the location of this film is a small town in California. A palpable depression hangs over the place, and this becomes strikingly apparent in the first major scene of the film. Every character deals with some struggle, albeit on scales of varying size. Clark integrated his characters better in this film, as the story revolves around a gamut of ages. It becomes clear about halfway through the film just how universally connected everyone is. This effect is especially transparent in such a small town setting. ​Ken Park ​is an example of a film that transcends boundaries and lines that hadn’t previously been crossed in cinema. There are more sexually-­charged scenes than in Clark’s earlier films. The physical content of this is quite visceral, as is the visible humanism that could be seen as the film progressed. This intertwining of unity and vulnerability had never been shown in something Clark had made before, and that is why K​en Park ​has become a film of merit.

Mister Lonely (Korine, 2007)
Mister Lonely ​is less of a film than it is a visual poem. The shots are profound, all-encompassing and beautiful. One can easily see Korine’s progression as a visual artist. This being one of his later films, it’s clear that cameras of better quality were used. The story itself is rather languid. “Movement” would be a valid word to describe what is seen on the screen. Korine paces the film almost as if it were a slow dance. From the first shot of a Michael Jackson impersonator dancing on a Parisian plaza to a shot of a group of nuns floating in the waves of a tropical locale, everything is done deliberately slowly. This brings the viewer to the overarching theme of the film not being one of action, but one of poetry in motion. The narrator of the film—who is also the Jackson impersonator—tells his audience a quietly prophetic poem that anchors the rest of the plot. “Plot” itself is a loose term in reference to this film, as there isn’t much of one, but as far as the poetic aspects go, ​Mister Lonely delivers.

Trash Humpers (Korine, 2009)
Trash Humpers ​resorts back to Korine’s raw style. Seeing as it was made on a VHS tape, the footage featured in the film is quite grainy. This, however, certainly adds to the overall effect. If the cinematography was more clear, the images and their respective contexts would not have been as striking as they are when viewed in the format it was ultimately made on. This film once again demonstrates Korine’s extremely nihilistic tendencies through his characters. While T​rash Humpers initially would seem to be about a group of anarchist elderly people, it actually features a cohort of all ages. Not much happens for a great deal of the film, but some scenes are hard to handle. This was a very dark Korine film in that there was more violence and torture than in his previous works. ​Trash Humpers ​is ultimately made for a niche audience, as it’s not necessarily that interesting. Thoughts aside, the film remains an example of nostalgic Korine for diehard fans of his work. 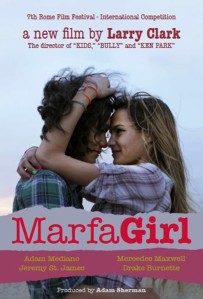 Marfa Girl (Clark, 2012)
Marfa Girl almost acts as an homage to the rest of Larry Clark’s films. Set in the namesake town of Marfa, Texas, it becomes fair to say that this seals in just how important a sense of place is to Clark. Each one of his films are not focused merely on their their characters, but also their location, which, in turn becomes a character unto itself. Marfa is the perfect location for this film, as it puts the characters into a perfect predicament. A shady border patrol officer is stalking a Mexican-American adolescent, who is engaging in illicit sex with a few different women. There are many secrets brewing under the surface of this film, and the location becomes an incubator for the characters and their respective experiences. One interesting aspect of ​Marfa Girl​, is that it doesn’t necessarily revolve around a girl in or from Marfa. Instead, the story deals more with the teen boy in question and the people in the town who integrate themselves into his life. M​arfa Girl ​then becomes a parable for life itself, leading back to the idea of how we as humans are all connected.