by Erin Gardiner
From the December 2015 Issue

Planes, Trains and Automobiles (Hughes, 1987)
A businessman and an eccentric nomad collide, almost literally, in the middle of a crowded New York City street. Their perspectives are turned upside down when they end up in each other’s company for the next few days leading up to Thanksgiving. The whirlwind plot, a mix of absurd humor and heartfelt moments, brings to mind feelings of family and nostalgia. John Candy’s portrayal of a quirky shower curtain ring salesman teases out the good and the goofy in everyone and Steve Martin’s performance compliments Candy’s performance through its contradictory character quirks. There is a balance found in the two characters’ back-and-forth interactions that is inherently relatable. This film, although different from John Hughes’ iconic teen theme, is a truly enjoyable adventure.

Ferris Bueller’s Day Off (Hughes, 1986)
The thing about John Hughes films is that most of them aren’t meant to leave you stunned and questioning the meaning of life upon finishing them. They often have relatable messages, but they are presented in a way that appeals to everyone. In this case, it’s: “Life moves pretty fast. If you don’t stop and look around once in a while, you could miss it.” Ferris Bueller’s Day Off shows us what we all wish we could have done in high school, and the storytelling includes us in the thrill when Matthew Broderick speaks directly to the camera. The cinematography creates interesting perspectives. Watching Cameron (Alan Ruck) pace back and forth in the driveway from the front seat of his car makes the audience feel like another one of his friends, laughing along at his inability to decide whether he should buy into Ferris’ idea. The same concept applies to watching from the safety of the Bueller household as Principal Rooney (Jeffrey Jones) is terrorized by the family pet. The unique storytelling choices make this film feel like a day off for the viewer as well. 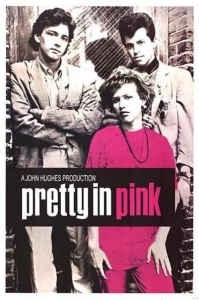 Pretty in Pink (Deutch, 1986)
*written by Hughes*
Pretty in Pink follows several people who all seem to be romantically interested in one another. It’s confusing at first—to sort out who feels what in the complicated love triangle (which is actually more of a love square). It’s easy to find oneself annoyed at everyone, except for Andie (Molly Ringwald), who is really just trying her hardest to be herself in a world that doesn’t accept her. James Spader establishes his role as the most chilling actor in Hollywood early on, despite the blow-dried pouf on his head. He’s consistently true to his character: a stuck-up rich kid named Steff. Meanwhile, Andrew McCarthy as the dreamy Blane—the apple of Andie’s eye—is sincere, but wishy-washy in his returned affection. Jon Cryer begs sympathy for his unrequited love as Duckie, but is undoubtedly selfish about it; however, in true 80’s-teenage-fantasy fashion, everyone gets what they deserve in the end, and the audience is left to ooh and aah over the adorable romantic ending that somehow made us forget there was no tangible conflict resolution.

The Breakfast Club (Hughes, 1985)
You’ll be hard-pressed to find someone who hasn’t seen or at the very least heard about The Breakfast Club. The reason so many people list it as the best John Hughes film ever made is because of the deep levels of humanity it presents. We love Pretty in Pink because it’s everyone’s romantic dream and Planes, Trains and Automobiles because our sides hurt from laughter at the end. But we love The Breakfast Club because we see ourselves in the characters, and their conversations act as a kind of second-hand therapy. For a story that mostly takes place in one room, one would hope for the film to excel in other areas, which it does. This movie illustrates the complexity of being human (specifically a teenage human) and the problems with the concept of trying to have a single, definable identity. On the surface, we see a princess, a basket case, a brain, a jock, and a criminal; however, when we get to know the characters, we notice that it’s much more complicated than that. The Breakfast Club is a compelling portrait about expectations, and what happens when you break them. 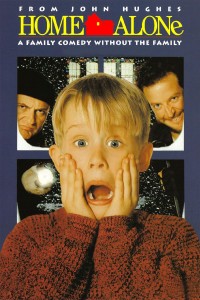 Home Alone (Columbus, 1990)
*written by Hughes*
Home Alone is a decent, perhaps even great movie when allowed to stand by itself; however, it was tragically made into a series, and unfortunately, I don’t think I can talk about it without mentioning the sequels. The series as a whole struggles to hold together the original concept, and there isn’t actually much real connection between each of the five films other than their name. If you pretend that there are no sequels and just focus on the original Home Alone, you’ll find that there’s a lot of merit to it. While Kevin (Macaulay Culkin) experiences some wild adventures at home, his mother (Catherine O’Hara) is worrying, maybe more than she should, while she frantically tries to get back to him. Chaos is fun to watch when it’s happening to someone else, there’s no doubt about that. The parallel plots race each other while the audience guesses when they’ll finally meet up again. When standing alone, Home Alone is a nostalgic coming-of-age film. Just leave the sequels out of it.