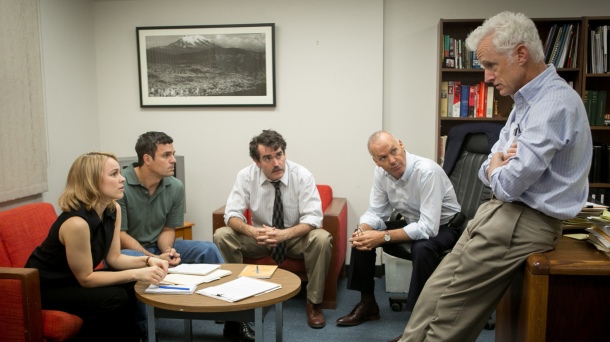 In 2001, The Boston Globe‘s “Spotlight” team was given the task of investigating further into a story about a local priest accused of abusing children. The team, led by Walter Robertson (Michael Keaton), ended up uncovering a pattern in how the Boston Archdiocese deals with priests who have molested children, revealing a greater story and an even greater truth to share with the Boston community.

Directed by Tom McCarthy (Win Win and The Station Agent), Spotlight is an incredibly tight movie with enough intrigue to keep you engaged from the first frame onward. The script, penned by McCarthy and Josh Singer (The Fifth Estate), is one of the best screenplays of the year, evoking an Aaron Sorkin-style as it ratchets up the tension through its conversations, which are all expertly performed by the actors. The character dynamics are very organic, and all interactions either serve the narrative progression or develop the characters. The screenplay also helps keep the film grounded—not only in reality, but the specific time period in which it takes place as well. It has an old school sensibility, recreating the feel of a Boston in which print journalism is on the cusp of being overtaken by the internet and Red Sox fans still lack the hope that their team with ever win the World Series again. The script presents well written characters on the page, and the performances really help to seal the deal.

The cast is a true ensemble, featuring fantastic performances from Mark Ruffalo, Rachel McAdams, Liev Schreiber, Brian d’Arcy James, John Slattery and many others. No one out shines the rest of the group and they all work together flawlessly. The actors who portray the titular Spotlight team (McAdams, James, Ruffalo and Keaton) really embody their respective characters without it ringing false. Along with the team itself, the other performances are all excellent across the board. Besides the central team, the standouts for me are the understated Liev Schreiber as the new editor brought in to revamp the paper and Stanley Tucci, who brings some comedic touches to the proceedings as Mitchell Garabedian, the lawyer who helps abuse victims.

While the screenplay and the performances are fantastic, the direction, cinematography and editing can sometimes leave something to be desired. The film occasionally feels like a stage play in its blocking. It reminds me of Danny Boyle’s recent release, Steve Jobs, which had a similar approach. The problem with Spotlight is that it doesn’t have the dynamic cinematography and editing needed to make the film more visually interesting. There’s a bit of solid intercutting early in the film, but the movie’s real focus isn’t on creating striking visuals, but on faithfully telling an intriguing story through great characters and dialogue. Also, music is used minimally, which sometimes works, but some scenes oddly go without it when they most need certain moments to be punctuated.

Spotlight really shines in its character development, storytelling and in the performances of a cast that brings an excellent screenplay to its full potential. While the cinematography and editing can be a bit lackluster at times, it doesn’t take away from the overall quality of the product. The focus of a story of this magnitude should be on the investigation and the people who conducted it, and Spotlight succeeds hugely in its exploration of that topic.