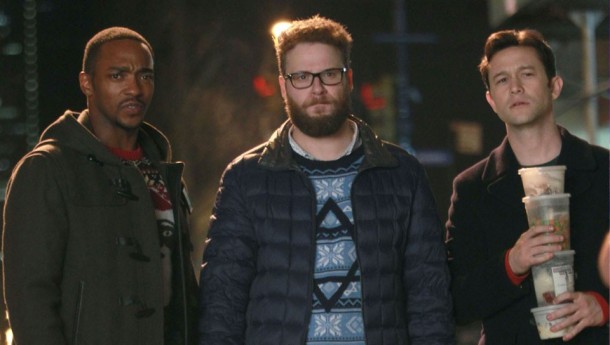 Ah, Christmas movies: they’re nostalgic, magical and, usually, disappointing. While we have classic holiday films such as It’s a Wonderful Life, A Christmas Story, Elf and Die Hard, it’s often a genre full of uninspired, heartless garbage. Looking to remedy the problem, Jonathan Levine and Seth Rogen have teamed up again to bring audiences a film that is anything but heartless. The Night Before follows three best friends trying to navigate the complications in their separate personal lives (such as fame, love and responsibility), amidst issues arising within their own declining friendships.

At the film’s start, it is explained that Ethan (Joseph Gordon-Levitt) lost both his parents in a car crash 14 years prior. After this happened, a tradition was started. Every Christmas Eve, Isaac (Seth Rogen) and Chris (Anthony Mackie) would spend time with Ethan—giving each other prank gifts, consuming mass quantities of alcohol and romping around New York City, searching for parties. While Ethan clearly still needs this tradition, Chris has gotten too busy and too famous playing football, and Isaac is preparing for fatherhood. With their lives getting more complex, they decide to end the tradition with one last extravagant night out.

Classic hijinks ensue, but they are more subdued than the gags of the usual Rogen stoner comedy. The people are more grounded, the situations aren’t nearly as zany, and, while it takes place on Christmas Eve, there’s not a whole lot of magical realism or mystery involved. But, it’s not that there aren’t funny moments; in fact, they’re in abundance. The difference between The Night Before and some of the other Seth Rogen frat pack films is that the jokes don’t come at the cost of having to set its characters in ridiculous situations (see This is the End and The Interview). Unsurprisingly, there’s a fair amount of weed culture integrated and some weak potty humor is used here and there, but these elements are not quite so pronounced.

Luckily, the more grounded approach is totally fine. Levine does an excellent job of presenting the film’s funny aspects within a more dramatic context, just as he did in 50/50. These characters have enough interesting traits to warrant your attention, regardless of the humorous bits surrounding them. Each one is dealing with their own separate and believable vice. Levine and company keep the focus on this element, rather than waste scenes on jokes that ultimately wouldn’t contribute to the overarching narrative.

As with most of the recent “Frat Pack/Apatow Mafia” films, the cast is simply adorable. Having improvised most of the dialogue, Levitt, Rogen and Mackie have excellent chemistry together and know how to effectively piggy-back off each other’s jokes. Meanwhile, Jillian Bell (22 Jump Street) has some great scenes as Rogen’s loving wife who naively buys her husband a box of drugs. Mindy Kaling and Lizzy Caplan also appear for a few scenes as best friends, with Caplin being a former girlfriend of Ethan. Without spoiling anything, no one’s talents go to waste, and there are a ton of cameos by some hilarious people that provide some of the film’s best moments.

It should not be a surprise that The Night Before is a funny film. There are a few genuine laugh-out-loud scenes, such as a drugged-up Rogen accidently wearing a sweater with the Star of David to a catholic midnight mass, but its most effective moments are those of emotional weight. With well-crafted characters, funny jokes and a lot of heart, The Night Before is a worthwhile addition to the catalog of Rogen’s bro-centric films. If you’re in the mood for a holiday themed film this winter, The Night Before is probably your best bet (Unless Krampus surprises everybody).