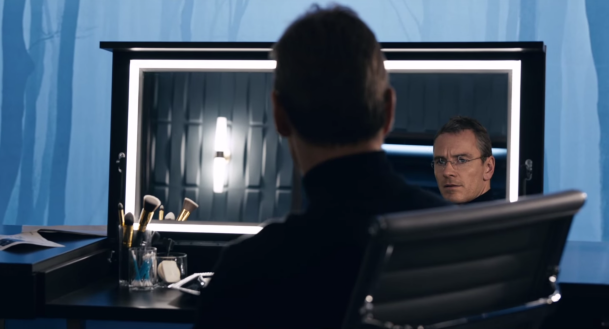 Posthumously, Steve Jobs seems to be mythologized more each day. His influence is everywhere—in the pockets and homes of people across the nation and the world. Yet none of us know what he really did, which is why when Steve Wozniak (Seth Rogen) asks him, “What do you do?” we struggle to produce an answer. The latest in the recent onslaught of films on Jobs’ life aims to bring him down to everyone else’s level; to take the public’s technology angel and clip his wings.

Versatile filmmaker Danny Boyle’s newest film (seriously, this guy can do anything) takes place over three prolonged sequences, each before a key product launch in his career. Starting in 1984 at the launch of the first Apple Mac, the film immediately delves into his personal life rather than his professional life, which is a focus shared by the remainder of the film. Jobs (Michael Fassbender) is taken to task over his relationship with his former girlfriend, his lack of acknowledgement of their daughter, and his treatment of employees and friends. While the 2013 Ashton Kutcher-starring biopic glossed over some of the negative reports about both Jobs’ personal life and personality, in this rendition, they remain at the forefront. It’s a fascinating portrayal that delves deep into his psyche and asks pertinent questions about where that behavior came from. Was he a dedicated leader who simply asked a lot of his employees or a narcissist who couldn’t give a rat’s ass about anyone but himself? While the reality is certainly somewhere in the middle, Steve Jobs presents its titular figure as being closer to the latter.

As usual, Kate Winslet and Jeff Daniels bring their signature brands of charisma. What nobody saw coming though, is a dramatic performance from legendary stoner, Seth Rogen. Seemingly following in the footsteps of comedic actors, Jonah Hill (Moneyball) and Tyler Perry (Gone Girl), Rogen not only holds his own, but excels with intense and dialogue-heavy long takes in which he shares the stage with some of the most gifted actors in the world. His scenes with Michael Fassbender as an intimidated, but loyal member of Steve’s entourage will go down as some of the best in his career. As for the title character, Fassbender flies through conversations with savage pragmatism and wit, delivering the intelligently written lines excellently. While he will certainly be a contender for Best Actor come awards season, the real star of the show here is the dialogue.

All of this is done through a series of intimate conversations. Danny Boyle teams up with revered screenwriter, Aaron Sorkin, who delivers his most energetic script yet, offering incredibly fast paced scenes and snappy dialogue. Sorkin’s written some fantastic movies with especially potent scripts (Moneyball and The Social Network), but never has he written one with this much vigor. There’s more tension in these conversations than even the most adrenaline-fuelled films this year, and there are more one-liners here than in Fight Club. It’s meticulous, fast and incredibly complex.

What the script lacks, however, is a sense of direction. The film stays hectic throughout, but it never really goes anywhere. Framed by three distinct sections of his life, the structure of the film falls a bit short as a cohesive narrative. It isn’t a really strong arc for the character as much as it is just three conversational showcases. While it makes dramatic sense to have Jobs talk through all his issues before each product launch, it’s obvious that some of these conversations would’ve taken place at very different venues under very different circumstances. Without spoiling anything, the ending also feels a bit like a cop-out, betraying the film’s previously established character development.

Steve Jobs is humorous, fast-paced and worthy of your time, but likely marks the explosive end to a run of autobiographical films and documentaries released since his death in 2011—I assume. If this is indeed the case, Danny Boyle and Aaron Sorkin have ended it with a bang. An impressive cast does the script justice, overshadowing the minor structural flaws and creating the defining theatrical film of a divisive man.