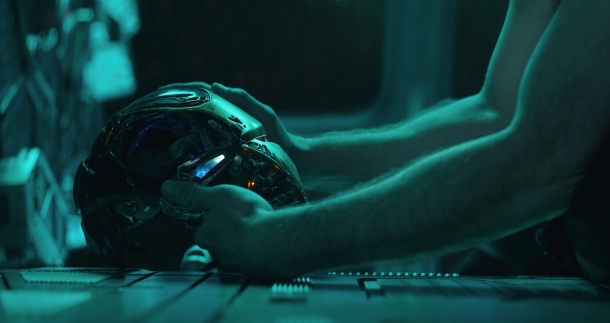 Avengers: Endgame (2019) is the the twenty-second film in the Marvel Cinematic Universe and the second to be released this year, after Captain Marvel (2019). An unforgettable spectacle for the ages, Endgame manages to excel as both a satisfying payoff to the universe-altering events of last year’s Avengers: Infinity War (2018) as well as a coda to the entire Marvel Cinematic Universe, which began eleven years ago with Iron Man (2008).

I’ll start my review with a bit of a warning: this film is not for casual fans. It’s for the true Marvel die-hards who have been following this series for the last eleven years. I wouldn’t say it’s necessary to watch all twenty-one prior Marvel Cinematic Universe films, but several that are absolutely critical to the events of Endgame are last year’s Avengers Infinity War, 2012’s The Avengers, 2014’s Guardians Of The Galaxy, and most surprising of all, 2013’s Thor: The Dark World. But if you do opt for the long haul and revisit all the past films, you’ll be rewarded. The amount of fan service is absolutely off-the-charts in this one. I’ll reiterate: please, do not go see this film without the proper context, as I guarantee it will be a confusing and rather uncomfortable viewing experience.

Needless to say, it’s incredibly difficult to review Endgame without delving into spoiler territory. The plot picks up immediately after the conclusion of Infinity War, in which intergalactic warlord Thanos (Josh Brolin) activates his completed infinity gauntlet and wipes out half of all living creatures in the universe. Leave all your Leftovers jokes at the door, as the film fully commits to the premise. Fans will recall some of their favorite Marvel characters reduced to ash before their very eyes.

The only heroes remaining are Iron Man (Robert Downey Jr.), Captain America (Chris Evans), Thor (Chris Hemsworth), Black Widow (Scarlett Johansson), Hawkeye (Jeremy Renner), Hulk (Mark Ruffalo), Rocket Raccoon (Bradley Cooper), and War Machine (Don Cheadle). Struggling to cope with failure and defeat, they must either adjust to their new reality or bank on a one-in-a-million chance (or one in 14,000,605, as Doctor Strange states in the prior film) to potentially reverse Thanos’ genocidal actions.

Endgame certainly does carry a morose tone for the majority of its gargantuan three-hour runtime, but what really surprised me is that it also contains some of the goofiest moments in the entire Marvel Cinematic Universe. The first hour in particular is full of surprises, as we see how each of the surviving Avengers are coping with their devastating loss to Thanos. It’s no spoiler to say that some have adjusted better than others.

Regarding the three-hour runtime, I didn’t notice any obvious filler or material that should’ve been left on the cutting room floor. This is the culmination to an eleven-year, twenty-two film series: I don’t think anyone wanted a rushed finale with all kinds of threads left dangling. That being said, maybe don’t go for the large drink this time around.

Performance-wise, everyone here is in top form. Right from the earliest scenes, the viewer certainly gets the impression that this is the last big adventure for these characters. As awful as it is, Thanos’ snap conveniently allows the film to focus more on the original six Avengers, rather than juggle dozens of characters. I was particularly bothered by how little screen time and development Captain America was given in Infinity War, so I’m pleased to say he’s certainly given proper attention in Endgame. Chris Hemsworth’s Thor is another standout, continuing the character’s fascinating trajectory that began in Thor: Ragnarok (2017).

Fans needn’t worry, each of the original six get several standout moments that are sure to shake the theater with applause. Yet there are also quite a few moments that’ll certainly generate controversy. As with Infinity War, I applaud the writers for making these daring choices, as they ensure both the incredibly high stakes and finality of the events in this film.

One aspect of the film that didn’t quite work as well as it could have for me is the final battle sequence in the third act. While it’s certainly epic and on a scale unlike anything we’ve seen in the Marvel Cinematic Universe thus far (seriously, this tops even the Wakanda battle sequence in Infinity War), it’s a bit too reliant on sweeping CGI shots, and several dodgy cuts take the viewer out of the action for a moment or two. It’s a minor complaint, but I’d definitely advise sitting at least a few rows back to avoid sensory overload.

Overall, I couldn’t be more pleased with this film. It’s an incredible achievement, an absolute game-changer, and the film event of the decade. If you’ve grown up with these characters over the last eleven years like I have, you don’t want to miss this.