After kicking off on Wednesday night with Park Chan-wook’s erotic thriller, The Handmaiden, the 5th Annual Ithaca Fantastik Film Festival had its first full day of screenings at Cinemapolis in downtown Ithaca, New York yesterday, opening its doors to enthusiastic horror fans and curious cinephiles alike. The Fest is set to have yet another exciting slate of unique films from around the world and one could already feel the buzz beginning to spread for early festival favorites. Representing Filmic Magazine, I was there to cover all the action (or at least as much as humanly possible). The following collection of capsule reviews addresses the four films I saw, but in addition to these, the Ithaca Fantastik screened the Africa-set survival film, The Naked Prey, an affectionate documentary about Stanley Kubrick’s personal driver called S Is for Stanley, Anna Biller’s tribute to ’60s pulp novels, The Love Witch, and Sadako v. Kayako, in which The Grudge collides with The Ring.

The Open (dir. Marc Lahore)
Picture John Hillcoat’s The Road, only with tennis instead of roving bands of cannibals and you more or less have a sense of how The Open operates. Set in a post-apocalyptic wasteland that looks like the same rocky countryside where Mads Mikkelsen began his violent journey in Valhalla Rising, the film concerns a former tennis superstar who trains with a stranger to compete in an upcoming championship match. Of course, there is no such match outside the imaginations of our isolated trio of protagonists. The rackets have no strings and not a single tennis ball is in sight. The circumstances of the world outside of this constructed reality vaguely smell of international war and each instance of fighter jets passing overhead threatens to shatter this fragile environment where delusions are the only thing shielding these people from madness and despair.

The premise of The Open is not wanting for creativity, but the execution leaves something to be desired. Story developments are limited and understated to the point of monotony as the film focuses in on a repetitive cycle of training sequences and brief interpersonal moments that suggest little more than the obvious about the conflicted emotions of our main pair of athletes. Despite a big climax, the film doesn’t earn its intended payoff and ultimately comes off as something that might have been better served as a short film. The level of insight just doesn’t match the ambition of the abstract setup and it unfortunately ends up feeling like a bit of a slog.
[Rating: 2 out of 5 stars] 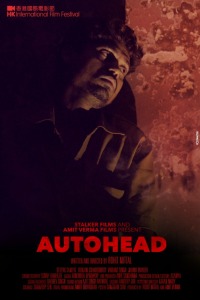 Autohead (dir. Rohit Mittal)
My day got a whole lot better when I got to see this intimate found footage thriller about a documentary crew that decides to follow the wrong rickshaw driver. Our young group of filmmakers go into this enterprise with the noble intentions of “wanting to show the lives of poor people,” but their humanitarianism soon gives way to exploitation. Their subject is a vindictive young man named Narayan who frequently displays toxic attitudes towards women, expressing strong feelings about what he’s obligated to and lashing out when he’s challenged or doesn’t get his way. The character starts off as pathetic and seemingly harmless, but over the course of the film, we watch as the facade cracks and dangerously sociopathic tendencies emerge. During this time, the film’s intensity slowly mounts and the integrity of the documentarians erodes as they choose to document Narayan’s acts of violence rather than stop them from occurring — the goal being to sell their sensational footage to bloodthirsty news networks.

Autohead is an engrossingly crafted thriller, perfectly establishing an unforgettable and disturbing antagonist while also nailing the sense of realism that the best found footage films possess. The story’s satirical elements show shades of Man Bites Dog, but the unique identity of the film is distinguished in part by its biting critique of India’s contemporary film industry and marginalized nature of the nation’s impoverished voices. The film repeats itself a bit too much, occasionally falls into the “washing the world of its filth” trope and stumbles for a period of time near the end, but it’s an otherwise refreshingly envisioned and surprisingly thoughtful serial killer tale that should not be missed.
[Rating: 3.5 out of 5 stars]

Pet (dir. Carlos Torrens)
Of the four films I saw at the festival on Thursday, Pet is definitely the most conventional and accessible one of the bunch. That isn’t to say that it doesn’t do some interesting things, though. Dominic Monaghan of Lord of the Rings fame stars as a reclusive creep who obsessively pursues a high school acquaintance (Ksenia Solo) and imprisons her in a homemade cage. He does this not in an effort to torture or rape her, but with the intention of “saving” her — from what, we gradually find out.

It’s also worth mentioning that out of the four films I saw, this is the most easily spoilable one, due to its twisty nature. Because of that, I’ll keep this write-up relatively short. The strength of Pet comes from the power dynamic between the two main characters and how that power ebbs and flows throughout the story. It is genuinely difficult to pin down where the film is headed and which of these two people will ultimately come out on top in an increasingly complicated test of will and mental strength.

There isn’t anything all that impressive about the direction or visuals and for a psychological film, the characters are oddly superficial in the traits that define them, so I can’t say that it’s an exceptionally stunning experience, but it is an undoubtedly captivating ride — constantly keeping your mind working, all the way up to its head-scratcher of a conclusion.
[Rating: 3 out of 5 stars]

Wolfen (dir. Michael Wadleigh)
If there was ever a film that deserved cult status as an underappreciated hidden gem, it is Michael Wadleigh’s Wolfen. Thursday night ended on a high point with this unusual werewolf movie. Screened as a part of Ithaca Fantastik’s ’81 Werewolves retrospective (which includes An American Werewolf in London), Wolfen tells the story of New York detective Dewey Wilson, who investigates a series of apparent animal attacks. The case leads him into a world he never suspected could exist — a reality involving old gods that roam the modern urban jungle, making a home in the decaying infrastructure and defending what little they have left from an elitist forces.

The first-person stalking sequences are a major highlight, as the film takes a Jaws approach to its creature(s). Tension is high, the atmosphere is thick and there’s just enough clever levity in the banter between characters to balance out the building dread. However, for as creatively rendered as the film’s aesthetics are, the truly unexpected treasure of this movie is its rich subtext. I never would have thought that a werewolf thriller/investigative procedural narrative could be the perfect vessel through which to express the plight of disappearing cultures (specifically the Native Americans) and natural lands decimated by greed. After an intriguing lead-in and select moments of fear and sudden gore, the film winds up going out on a powerfully poignant note. The haunting nature of Wolfen is derived not from spooky imagery and shocking transformations, but from devastating ecological, political and socioeconomic realities. It’s always an enormous joy to see horror cinema gesture toward such topics with this level of grace and insight.
[Rating: 4.5 out of 5 stars]

For a more extensive take on the films mentioned here and the festival experience as a whole, check out this first installment of a 4-part series of solo podcast specials!