The Toxic Avenger (Hertz & Kaufman, 1984)
The Toxic Avenger is an unabashedly violent film from directors Michael Herz and Lloyd Kaufman of Troma Entertainment. It follows Mitch Cohen’s titular character as he finds romance and fights evil in the town of Tromaville. The film has no sense of irony, sticking to many of the superhero clichés, but taking them to extremes — the “nerd becomes a hero” trope stays intact, but the protagonist’s bullies are psychotic murderers. The Toxic Avenger is vastly different from other heroes in his tendency to brutally murder all of his enemies in ways that are unlike anything you’d find in your average comic book flick. The movie’s many villains are so despicable — killing children and dogs — that it feels satisfying when our hero administers his ruthless brand of justice. There’s also a great amount of joy that comes with viewing the film’s variety of locations and wondering what type of high concept action will occur in each scene. Obvious mistakes and cheesy effects are commonplace in The Toxic Avenger, but they only add to the shameless enjoyment that the film yields.

Kick-Ass (Vaughn, 2010)
Kick-Ass poses the popular question: “What if superheroes existed in real life?” For the most part, the film delivers on this premise, making “Kick-Ass” an incompetent teenager who’s in over his head and integrating social media into the story as an explanation for the scrappy hero’s sudden popularity. The realistic approach gives way to a great deal of the film’s comedy, with Kick-Ass’s attempts at heroism routinely failing. We get a great twist on the concept of superheroes, as most of the heroes are shown as comic-book geeks emulating the fictional characters they idolize. Despite the movie’s promise of “realistic” superheroes, the film often loses it’s sense of realism, with characters performing gravity defying stunts and — at one point — donning a jetpack. This is made up for with the pure fun and energy of the action scenes — the frantic cinematography and constant violence giving them a shot of adrenaline. The foul-mouthed supporting character, Hit-Girl finds herself at the center of many of these scenes and ultimately manages to become the film’s main appeal. Chloe Grace Moretz contributes a great deal to the character with her youthful energy and ability to do her own stunts (despite being so young at the time of filming). Packing plenty of humor and action, Kick-Ass is tons of violent fun. 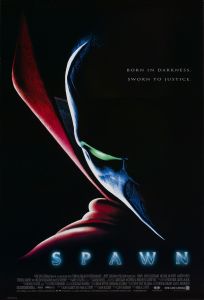 Spawn (Dippé, 1997)
Spawn was the first attempt to adapt a title from Image Comics (the company behind The Walking Dead) and the film is slow right out the gate. It devotes too much time to establishing Spawn’s backstory at the beginning of the movie, and once it finally gets going, the action scenes leave much to be desired. The violence is heavy, but there’s little entertainment value and hardly any impact from the bloodshed on screen. The film drowns itself in overbearing special effects of subpar quality. A particular character through which this occurs is Malebolgia, the demon who gave Spawn his powers. The character is visually atrocious and looks fake, even by ’90s standards. Actors are layered with unnecessarily large amounts of makeup, too. As Spawn, Michael Jai White gives the character a deep, growling voice that makes him come off as a failed attempt to be serious. He’s never very relatable. Even with the loss of his family, Spawn never expresses any personality. But the worst performance by far is John Leguizamo as “The Clown” (also known as “Violator”). Violator is an irritating character who tries to be humorous, but the performance doesn’t provide any real laughs. Neither fun nor compelling, Spawn is an example of what could go wrong when making an R-rated superhero film.

Watchmen (Snyder, 2009)
Based on the 12-issue comic-book series of the same name, Watchmen plays less like a superhero movie and more like a mystery film with superheroes as the main characters. Coupled with this mystery is commentary on the cold war, showing how these superheroes dealt with Vietnam and the general fear of communism that spun out of the era’s events. Watchmen attempts to emulate the compelling themes and character-focused drama of its source material. However, as an R-rated movie, Watchmen lacks the “maturity” it strives for. Zack Snyder makes use of his trademark touches (a dull color palate and heavy use of slow motion), but these stylistic choices prove to be cumbersome and unnecessary. Numerous action scenes are seemingly tacked onto the film, undercutting the movie’s somber tone. With the addition of an overly long and tasteless sex scene set to Leonard Cohen’s “Hallelujah,” Watchmen’s primary problem is that it’s conflicted between being a hard-R action film and being a serious drama.

Super (Gunn, 2011)
Super opts for a very different approach to making an R-rated comic-book movie. Much like some other films in the genre, Super contextualizes superhero tropes by placing them in the real world. Before seeing this film, you could be forgiven for thinking that Super is an ordinary comedy. But this misconception is quickly dispelled when you find out that the protagonist, Frank, is mentally unstable. His self-righteous and destructive nature sets him apart from the typical protagonist. Unlike other superhero films, Super portrays violence and vigilantism as a poor solution to crime. The violence is less indulgent than you might expect because it’s meant to shock and horrify. This effect is achieved through director James Gunn’s trademark mixture of hyper violence and irreverent humor. Rainn Wilson and Ellen Page (who plays Frank’s sidekick, Libby) deliver performances that nicely compliment and contrast with each other. Libby’s overenthusiasm plays well against Frank, who is more dry and straightlaced. The actors’ often deadpan deliveries convey the psychotic nature of their characters while simultaneously allowing the audience to take them seriously. Super is a surprisingly thought-provoking film that is worth a look.