by Elizabeth Esten
From the December 2015 Issue

Red State (Kevin Smith, 2011)
Heavily inspired by the Westboro Baptist Church and the late Fred Phelps, Red State was the first foray into horror for Kevin Smith (who is largely known for quirky comedies like Clerks and Dogma). The film tells the story of three teenage boys living in a small town who end up drugged and kidnapped by the local Five Points Trinity Church after being tempted by a sex ad online. Led by Abin Cooper (Michael Parks), the church is responsible for the murders of many local gay teenagers. Red State had the potential to be a great horror thriller and a solid commentary on fundamentalist churches. Unfortunately, the final product isn’t as tight as it should have been.

The story is good, the dialogue is solid, the editing is well done and the cinematography is great. Where the problems come in is the execution. Smith seems to unravel in his direction by the second act, losing any semblance of social commentary and resorting to violence for shock value. The script does have solid set ups. Stephen Root’s repressed gay sheriff character would be a good example of this, but he is only really used so the plot can move forward, essentially becoming useless. But despite its general flaws, the film has one brilliant factor: Michael Parks’ Abin Cooper.

The character of Abin Cooper is brilliant in every conceivable way. Smith clearly put a lot into the him and Parks embodies the character. The best scene in the film, by a wide margin, is when Cooper is preaching to his congregation about God’s hatred and “the evils of homosexuality.” What makes this scene so effective is the simplest thing: Smith cuts away to young children watching Cooper in awe, seeing him as some sort of godlike figure. This is the most powerful moment of the film and one of my favorite moments of Smith’s entire filmography. 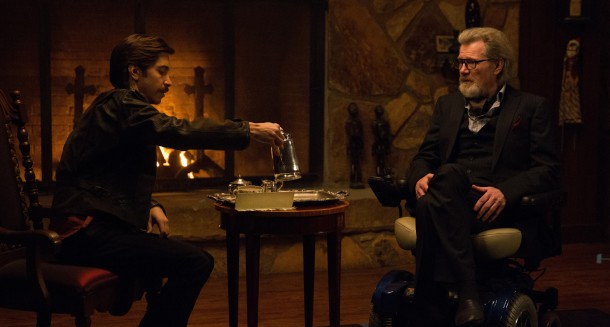 Tusk (Kevin Smith, 2014)
Smith delved back into horror merely three years after Red State with Tusk, inspired by a posting on the British equivalent of Craigslist. Leaning more toward the comedic side of horror, Tusk brings Michael Parks back as another crazy man who shakes up the life of our main character—Justin Long’s insufferable Wallace having taken over that role. Tusk is more entertaining, but it’s very similar Red State in that the potential for a good horror movie is buried under a series of terrible decisions.

While the tone of Red State was consistently serious, Tusk jumps in tone from straight comedy to straight horror with a complete lack of balance across the board. Some scenes are so distant from each other in tone, it feels like you’re watching different movies. The comedy works at no point in the film and although Johnny Depp’s inspector character is a solid idea, he’s poorly written. The only reason this film even exists is to showcase the insanity that is Michael Parks.

Smith has gone on record saying that his intentions behind Tusk have always been to create a messed up character for Parks to play, and the actor is the only reason you should watch the film. Parks’ Howard Howe is the best-written character here, and Parks’ performance is best in show.

You can really tell throughout the film that Smith loves the Howe character the most and did his best to center the movie around him. The scenes with Parks are more effectively done, more interesting and more entertaining than any others. Howe has lost all faith in humanity and it’s a great portrayal of what the extremes of isolation at a young age can permanently do to a person’s mental state. There’s a good reason why Wallace is a terrible person, and it’s because we’re really seeing him from Howe’s point of view. The only way the film can work is to make Wallace merely a victim of Howe’s actions.

Conclusion
Both of Kevin Smith’s attempts at a fresh genre are incredibly flawed. It’s amazing that two movies of the horror persuasion can come to a director whose major successes are largely in comedy. Both films had great potential, one making a commentary on a real life incident and the other creating a spectacle of a man being sewed into a walrus costume. While Tusk is the more entertaining watch, Red State has a better concept with a flimsier execution. Both should be witnessed, though—but only for Michael Parks’ amazing performances.