by Kevin Fermini
From the December 2015 Issue 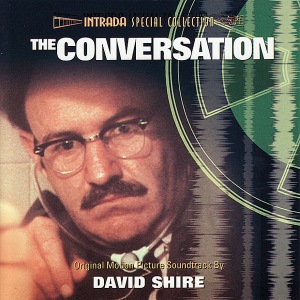 A soundtrack as haunted as its film’s central protagonist, David Shire’s score for The Conversation adds an incredible layer to an already marvelous work of cinema. Gene Hackman’s character, Harry Caul, navigates the ghostly quiet streets of San Francisco, a man lost in moral dilemma and alienated from the world around him. Meanwhile Shire’s score, a solo piano performance, wanders through minor keys, lost and paranoid, afraid and agitated. It feels as if – like Harry – the score could dive off-course at any moment, with Shire’s dizzying minor arpeggios moving sharply across his piano. An effective, lonely score which embodies the cold chill of isolation to a tee.