by Justin Bertolero
From the October 2015 Issue 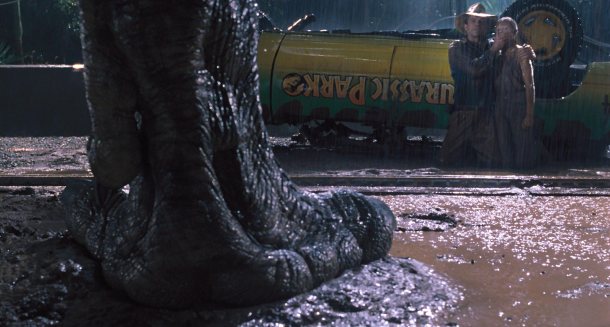 Everyone loves going to the movies. Some people have strange rituals when it comes time to take a seat at their local cinema, but there is one thing that many agree on: you can’t miss the previews. This classic staple of the big screen is an often overlooked pleasure, but these advertisements have been around for a long time. Like most aspects of the entertainment industry, the execution and purpose of movie trailers has changed over the years. Unlike its modern use, the word “trailer” comes from its original placement at the end of the film reel, “trailing” behind the feature. Originally referred to as an “epilogue” in 1913 at Coney Island, the first trailer was shown to promote the broadway show The Pleasure Seekers (Fear, 2013). As time went on, the movie trailer became a more consistent form of advertising, gracing the screen before most theatrical films.

Moving into the modern era, the golden-voiced Don Lafontaine could often be heard uttering the words “In a world”, describing the next big action spectacle or romantic comedy to his viewers. This format of trailer became a staple of cinema, showing up on VHS tapes, commercials, and eventually DVDs, which in turn created the standard for film advertising. Next came the instant gratification of YouTube and web sources, which allowed trailers like Star Wars: The Force Awakens to gain tens of millions of views in one day. Along with the introduction of teaser campaigns, the shift in structure and role of the movie trailer changed the way audiences got excited for upcoming films.

The main goal of a movie trailer, or any advertisement for a film, is to increase a viewer’s desire to see a movie without giving away enough to make one feel they don’t need to see the movie. There are key elements that work together to create a successful trailer. A prime example of one of the best movie trailers of all time is 1993’s Jurassic Park. It’s no secret that the key to the film’s massive success was its use of revolutionary technology to bring the terrifyingly real dinosaurs to life; however, looking back at the marketing, one might be surprised to realize that not one single dinosaur is completely shown to the audience. Using John William’s score and selective shots from the film, the audience is given just enough of a feel for tone and plot to make them go see the movie. When the film was released, audiences around the world felt the full effect of the visuals because they were seeing the dinosaurs truly for the first time on the big screen.

Movie trailers, however, can often be completely misleading. It is important for one to keep in mind that beyond all else: Hollywood’s number one concern is to make as much money as possible. Much of this responsibility lies on the shoulders of a studio’s marketing department. Consequently, when given a straightforward drama film starring Jim Carrey, the best business strategy would be to capitalize on the actor’s fame to its fullest potential. When The Truman Show was marketed, audiences were given the idea of a film that was first and foremost a comedy, which was simply not the case. A similar situation was that of Lost In Translation, Sofia Coppola’s dreamy 2003 drama. Bill Murray is regarded as one of the best comedic actors of all time, which was reflected in the trailer for this film. Backed by a cheerful Elvis Costello song, the moody, often dreary film is unabashedly pitched as a feel good romantic comedy. What little amount of comedy there is in the film was exploited to the furthest possible extent, which left audiences with confused reactions leaving the theatre. While critically praised, many were disappointed by the film’s artistic aspects, hoping for the more traditional comedy they were promised. This trend does not only apply to comedy, though. As any fan of the Evil Dead franchise would know, Sam Raimi is a master of the horror/comedy genre. His recent film Drag Me to Hell was put through the mismarketing treatment, being pushed as a straight horror film. Again, despite critical praise, the majority of audiences were not given what they expected and left the cinema unhappy.

Those who enjoy blockbuster “tentpole” films might mock the independent film world for being too artistic or pretentious. On the other hand, independent film fans often accuse the mainstream studio system of unoriginality and weak structure. Despite the fact that these two systems are actually codependent, thriving off one another’s success, their ever raging battle is often fueled by marketing problems. Again, the idea of money infiltrates most aspects of a film’s marketing, and as the entire structure of indie cinema is based on limited budgets, these economic concerns fuel their decisions even more directly. This creates tension between film fans and filmmakers alike, as independent cinema is repeatedly misconstrued as mainstream popular film.

The 2011 indie darling, Drive, directed by Nicolas Winding Refn was a stylish art house action film. Again utilizing the star power of Ryan Gosling, the film was marketed as a popcorn action film. Despite the critical appeal, many casual fans were left unsettled by the film’s hyper-realistic blend of violence and somber story arc. One can argue that this tactic is meant to open the work up to a broader audience, filled with filmgoers who wouldn’t necessarily seek out this type of movie. While the marketing team for this film might claim this method was used to bring more attention to their limited release film, the misrepresentation of Drive, and indie movies as a whole, often hurts the overall reception by general audiences. Many claim that a film should remain limited to its smaller, more highbrow audience rather than pander to those who don’t truly appreciate its intended value.

And then there is the issue of spoilers. All too often, a friend will accidentally share too much about what happened at the end of the latest Marvel movie. These spoilers don’t always have to be huge plot points, but just hearing a retelling of the best joke or a specific scene in the movie can be enough to ruin things. Such a thing has been seen in movie trailers specifically in recent years. The famous example of this is the 2000 Tom Hanks vehicle, Cast Away, in which Hanks’ character is marooned on an island for approximately 85 percent of the movie. The resolution of the film (spoiler alert) in which he is saved, is given away in the theatrical trailer. With this information revealed, any tension or sense of danger is significantly lessened. This is a trend that has only increased since that example in 2000.

The modern marketing of blockbuster films has not only significantly extended the runtime of each trailer, but has also released more trailers in each campaign. 2015’s Jurassic World even released a teaser trailer teasing the release of an actual teaser trailer. According to Sony, the marketing budget for The Amazing Spider-Man 2 was a reported $180 million. Sony released three trailers, each with at least a three minute runtime. Many critics claimed that every single action set piece in the film was completely shown in the trailer. This was also the case for Terminator Genisys, in which (spoiler alert) John Connor is revealed to actually be a terminator. Was this plot point really necessary to share in the trailer? In addition to spoiling most of the film’s major action set pieces, Paramount decided to reveal the crux of the conflict before the film was even released, and for what purpose? Surely audiences would have much rather realized the twist when viewing the film in its entirety. The trailer was definitely filled with enough Arnold Schwarzenegger nostalgia to draw audiences in. Even the director of the film, Alan Taylor, is quoted as saying “I certainly directed those scenes with the intention that no one would know” (Bartyzel, 2015).

Once again, it is imperative to view this situation through the lense of a Hollywood executive, one who believes the true value of a film lies within its monetary returns. Clearly, the marketing team for a tentpole feature such as The Amazing Spider-Man 2 or Terminator Genysis are not going to make any decisions without first conducting extensive research. This would indicate that the data they collect reflects audience’s desire to be given bulks of the film in advance. The two biggest blockbusters of the summer, Jurassic World and Avengers: Age of Ultron, were given very revealing marketing campaigns and saw massive returns in box office receipts.

These trends are a clear indication that this form of marketing isn’t keeping viewers away from the movies and that perhaps they don’t really care about being spoiled. With the ever increasing volume of mainstream cinema released each year, it is understandable that studios feel the need to make their films stand out amongst the rest. Blasting audiences with spectacle and revealing plot points in their marketing appears to be the most successful way of attracting viewers, so we can probably expect to see these tendencies continue.