Just as with comedy, the effect of horror is unique for every movie-goer. The same image that makes you yawn might very well have traumatized your friend for life. From masked slashers and hulking monsters to pale ghouls and the exaggerated surreality of a troubled mind, almost everyone seems to have that one thing that triggers the childlike fear and sense of vulnerability within them. Here are the films that have done just that for 14 of our writers.

Psycho (Hitchcock, 1960)
When it comes to classic horror movies, Alfred Hitchcock’s Psycho is a game-changing masterpiece. The infamous shower scene not only terrorized its audience in the 1960’s, but completely caught everyone by surprise. For most modern horror movies, on some level, everyone has a general idea of what’s coming. In the case of Psycho, not only does Hitchcock kill off his lead actress halfway through the movie, but it is done with such unexpected savagery. The victim is stabbed over and over again (Skree! Skree! Skree! Skree!) in her most vulnerable state and left to bleed to death. This film stomped out Hollywood’s classic system of staying orderly and cohesive, betraying its viewers and leaving them with the knowledge that in the end, none of us are ever truly protected.
– Erica Noboa

A Nightmare on Elm Street (Craven, 1984)
After watching Scream for the first time, I became more curious about the work of Wes Craven. One night in October, I decided to watch the original Nightmare on Elm Street in my room with the lights off. With it’s atmospheric tension and excellent use of jump scares, it was one of the first horror films to genuinely scare me. After it was over, I ran to my light switch and prayed that Freddy wouldn’t come get me in my dreams.
– Elizabeth Esten

Them (Moreau & Palud, 2006)
2008 marked the release of The Strangers, a film which left American audiences shaking in its wake. Two years prior, however, Ils (aka Them) emerged from the New French Extremity movement, likely inspiring The Strangers in both theme and execution. It focuses on a seemingly endless night of terror and brutality for a young, wealthy couple who are stalked by a gang of ruthless teenagers within the property of their new home. It’s one of the most effective films in the home-invasion sub-genre, and its most spine-chilling aspect is its restrained directorial style, as well as how much it leaves up to the viewer’s imagination. Ultimately, Ils’ portrayal of senseless and random violence within a space one typically perceives as safe will remind viewers to lock their doors at night and be weary of what could be lurking outside the window.
– Susie Brancaccio

The Exorcist (Friedkin, 1973)
At the young age of six, I vividly remember my older brother popping in The Exorcist VHS tape, claiming that I would be “too chicken” to watch the movie straight through. While at first I didn’t understand the hype behind the film, having once heard my father saying it was the “scariest movie ever made,” it was eventually made blatantly clear why he felt this way. Horrified by the deep demonic voices and satanic imagery, I ran out of the room, unable to sleep with the lights off for weeks afterwards. Obviously, contemporary gore and “torture porn” films have desensitized us from the simpler scare tactics of early horror, but despite this, the image of Regan climbing down the stairs spewing demonic pea soup still disturbs me far more than any Saw sequel ever will.
– Justin Bertolero 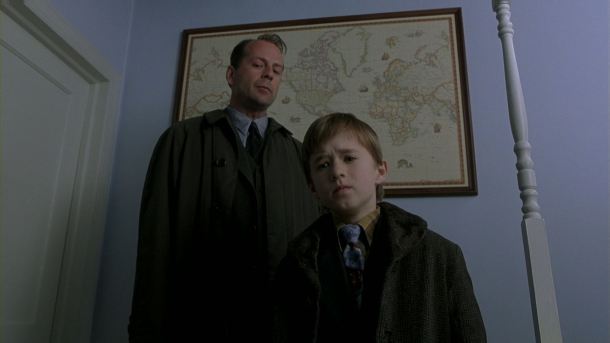 The Sixth Sense (Shyamalan, 1999)
I had heard tales of how scary The Sixth Sense was, which immediately drew me towards watching it. Naturally, I invited my closest friend from middle school over and we watched the film in my basement. I was taken by how complex the narrative of the film was, but some of the spirits that were featured in the story scared me so much that I couldn’t sleep for the next few days. I have yet to give the film another viewing as a result of being freaked out so deeply by it.
– Haley Goetz

Hour of the Wolf (Bergman, 1968)
Existential dread might just be the greatest dread of all if Ingmar Bergman has anything to say about it. Hour of the Wolf is the only horror film the Swedish director ever made (if you don’t count The Virgin Spring) and it’s a fittingly heavy piece of work. While vacationing with his wife at a secluded island, a painter slowly falls apart as his fears and anxieties begin to manifest in a series of unsettling encounters. The strange and surreal abounds, and upon first viewing, Bergman’s playfully ambiguous take on the tortured psyche of the artist was a profoundly distressing experience—not in a way that had me checking under the bed at night, but rather suspiciously scrutinizing the horror within. The film’s final 20 minutes in particular offer an increasingly disturbing waking nightmare that I will never forget.
– Byron Bixler

Videodrome (Cronenberg, 1983)
David Cronenberg’s 1983 hallucinatory thriller, Videodrome, tells the story of Max Renn (played by James Woods), the owner of a sleazy television network who accidentally discovers an unknown broadcast depicting scenes of ultra-realistic torture. Believing that the show (mysteriously dubbed “Videodrome”) is the future of his network, Max sets off to find the makers so he can air it for himself. Cronenberg flourishes his signature sense of body-horror to great success—the film depicts exploding gut-filled television sets and fleshy, pulsating VHS tapes that are inserted into greasy orifices split from the characters’ abdomens. Veiled in an unsettling synth-driven score composed by Howard Shore, Videodrome creates a matchless aura. By turning the act of watching television into a malignant, brainwashing experience, Cronenberg seems to challenge his audience to think: “Do the things that we watch forcefully mold our minds?” And if they do, who’s message are we absorbing?
– Tyler Macri

Scary Movie 3 (Zucker, 2003)
I couldn’t have been more excited for Scary Movie 3. Going to a PG-13 movie would have made me the coolest third grader at New City Elementary—except for maybe my friend Josh, who went with me and was sleeping over that night. Everything was perfect until the corpse of Tabitha (the film’s parody of The Ring’s Samara) crawled on screen. It was then that I saw the face that would give me nightmares for years to come, including that very night. And like all good eight year-olds, I ran for salvation to my parents’ bed, leaving Josh alone in my room. I don’t know if he ever found out this happened, but the fact that he didn’t speak to me for about a week after doesn’t give me much hope.
– Austin Gold

The Terminator (Cameron, 1984)
I think that the scariest moment in cinema for me comes at the end of The Terminator. Even looking back on it now, the cheesy metallic skeleton still instills fear in me. I think it’s all because of the movement of the terminator. It doesn’t maneuver like a human—it moves awkwardly, in short spurts of motion; however, this is in essence the scariest part about it: it’s a machine, not a man and those halting steps reflect this. Through just its movements, it manages to create one of the most realistic and frightening monsters of all time. Those dead red eyes also help out too.
– Sam Paulson

The Texas Chain Saw Massacre (Hooper, 1974)
It’s been over forty years since the release of The Texas Chain Saw Massacre, and in all this time, there’s yet to be a film that overshadows its atmosphere of dread and decay. The plot of the film is simple, and has since been recreated and ripped off so many times that even those who’ve yet to see it would probably find some familiarity in the storyline. Five friends on a trip into the country wander onto the wrong stretch of property; inside lurks the iconic, chainsaw-wielding Leatherface and his deranged family of grave-robbing cannibals. The rest is history—earsplitting, chaotic history. The most frightening thing about the film is not only its gritty realism, but also its complete rejection of a dependence on blood and gore to frighten viewers. Ironically, it relies more heavily on the two most rudimentary components of filmmaking—sound and image—the juxtaposition of which culminate in the most horrifying and unforgettable final shot in the history of genre cinema.
– Eli Hayes 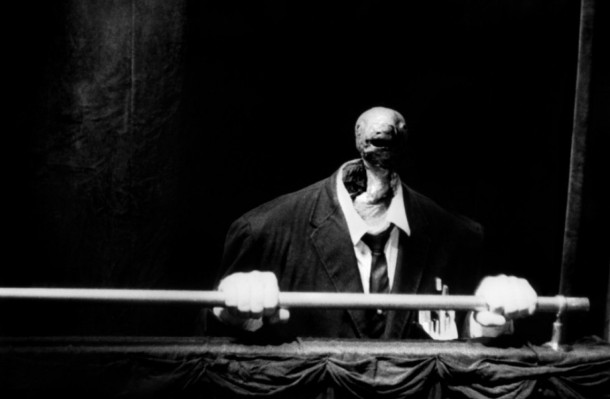 Eraserhead (Lynch, 1977)
Singing moon heads, alien birth, piano playing worm heads and so much more can be found in David Lynch’s classic Eraserhead. Many critics have tried to find a narrative in the avant-garde black and white film. Maybe it’s a metaphor for his fear of being a father or a portrayal of some post-apocalyptic future, but the scariest and most realistic possibility is that the film has no narrative at all. It has a fast pace where a bunch of mini horror stories are mushed together in one giant thriller. By the end of the first time I watched the film, my mouth was agape, my eyebrows were raised, and I couldn’t stop thinking: “What the fuck did I just watch?!” Seeing the film a couple days after and letting go of my persistence to find a narrative helped me to more completely enter the distorted mind of David Lynch.
– Morriah Lisowski 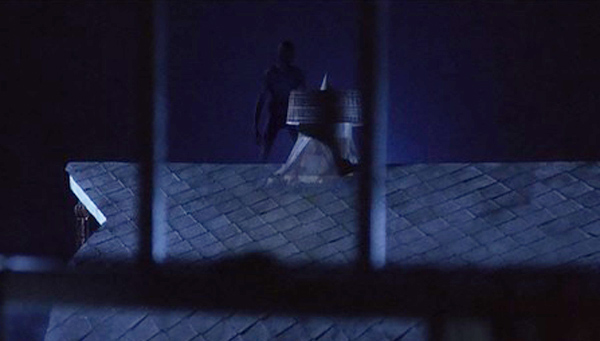 Signs (Shyamalan, 2002)
Signs was my ﬁrst horror movie and I was eight upon watching it in our family room with my dad. It’s about aliens, and there’s this part that has haunted me forever in which an alien walks by a child’s birthday party—that was my ﬁrst visual representation of such a thing. Then there’s another part where the alien is standing on a roof, looking down into the children’s window—I made my father buy me shades to cover my windows after this. I was also genuinely terriﬁed by the asthma attack Rory Culkin’s character had in the movie, because I myself have horriﬁc asthma. At the time, I decided that asthma attacks were caused by aliens—that ended when I was around 12. Aliens, man. They’re scary business.
– Courtney Ravelo

The Shining (Kubrick, 1980)
One of those hot sticky summer nights in high school. All the cool kids are probably at a huge farm party getting drunk. I have a broken leg and it’s been thirty minutes since I took my painkiller. My mattress has sloppily been thrown on the ground of the television room because I can’t walk up stairs too well. I take another painkiller. I manage to get to the kitchen—make some tea and a PB&J. I sit down on my mattress. I float on my mattress. I put The Shining into the player. The cute librarian highly suggested it to me. The patterns of the carpet attack my eyes and the slow clacking of the typewriter powers through the present buzz of drugs on my ears. Everything made sense. That was the scariest part. I accepted everything that happened in the Overlook as possible.
– Ryan Somelofske

The Last House on the Left (Craven, 1972)
This movie seethes evil. Startlingly violent and nihilistic, Wes Craven’s The Last House on the Left takes no pleasure in the atrocities its characters go through, photographing the murder of two teenage girls with an almost documentary approach. The subsequent revenge taken out on the killers is no sweeter and lacks any sort of uplifting sense of justice; in Craven’s world, violence begets violence, and violence brings only misery. One gets the feeling upon watching the film that Craven didn’t make this film because he wanted to, but rather because he felt he had to. It is one of the harshest examinations of brutality and the breakdown of morality ever put to film and remains deeply disturbing to this day.
– Kevin Fermini